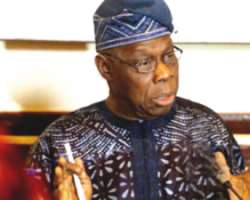 The Deputy Majority Leader of the Senate, Bala Na'Allah, on Tuesday, took a swipe at former President Olusegun Obasanjo for describing members of the National Assembly ( NASS) as corrupt.

'I am not corrupt and I have integrity,' he stated.

The senator said it was Obasanjo who allegedly bribed lawmakers in the legislature to back his third term ambition when he was the President.

Na'Allah stated, 'My attention has been drawn to a purported statement attributed to former President Olusegun Obasanjo, in which it was alleged that he made a sweeping statement to the effect that there are no men of integrity in the National Assembly.

'I am respectfully taking exception to the statement, which I express the hope that it is not true. To start with, it is not in my character to take issues with elder statesmen, who have had the privilege of superintending the affairs of our great country, Nigeria.

'If former President Obasanjo can come out with one proven record of corruption against me as a person, I promise to vacate my seat as a senator of the Federal Republic of Nigeria. For the records, I was the only member from Kebbi State, who did not find it worthy at that time to collect the sum of N50m as an inducement to subvert the constitution and provide a constitutional framework for the third term ambition of (then) President Obasanjo.

'I find this statement, if it is true, to be reckless and terrifying. The implication of the statement is to say that the entire over 170 million Nigerians have not elected a single person with integrity among the 469 members of the National Assembly. This is definitely rhapsodic and does not conform to common sense and reason.'

Obasanjo had, on Monday, said the ongoing revelation by a former Chairman of the House of Representatives' Committee on Appropriation, Abdulmumin Jibrin, on budget padding in the National Assembly had proved him right that the lawmakers were corrupt.

The former President spoke to State House correspondents shortly after a meeting with President Muhammadu Buhari behind closed doors at the Presidential Villa, Abuja.

Obasanjo, who had earlier described the lawmakers as 'armed robbers and rogues,' said the best way out of the current mess was to ensure that only men of integrity were elected into the National Assembly. - Punch.