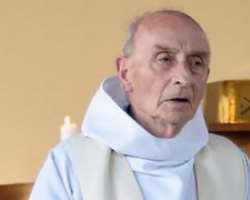 One of the terrorists involved in killing a priest in Normandy was wearing an electronic surveillance tag at the time of the attack.

Francois Molins, Paris prosecutor, said Kermiche's tag was deactivated for a few hours every morning, corresponding with the time of the attack.

Speaking at a press conference, he explained the attacker — who was shot dead by police — was arrested in Germany in March 2015 trying to join extremists in Syria using his brother's identity, and then was arrested in Turkey two months later using a cousin's ID.

Kermiche, was a local teenager whose parents flagged his radical behaviour to authorities and grew up in a housing project in Saint-Etienne-du-Rouvray, the town where father Jacques Hamel was slain.

Police were still seeking to identify the second of the two attackers and raids were under way, Mr Molins told a news conference after the attack. The two attackers forced the elderly priest to kneel before killing him and also filmed the murder, a nun who escaped the scene said on French radio.

The nun was one of several people taken hostage by the attackers during a morning Mass at the church in Saint-Étienne-du-Rouvray , near the northern city of Rouen.

“They forced him to kneel and he tried to defend himself and that is how the drama started” the nun who gave her name as Sr Danielle told RMC radio.

“They filmed themselves. It was like a sermon in Arabic around the altar.”

She added that she fled at the moment that one of the attackers killed the priest.

The Islamic State group has claimed responsibility for the killing.

The incident in Normandy ended with police shooting and killing the attackers. The claim, which came in a statement published by the Islamic State-affiliated Aamaq news agency, said the attack near the city of Rouen on Tuesday was carried out by “two soldiers of the Islamic State.”

It added the attack, in the small northwestern town of Saint-Étienne-du-Rouvray, was in response to its calls to target countries of the US-led coalition which is fighting Islamic State. Archbishop Dominique Lebrun of Rouen confirmed the identity of the priest as Fr Jacques Hamel.

French prosecutors say one person has been detained in the investigation. Five hostages

Two men armed with knives burst into the Catholic church in Saint-Étienne du Rouvray, in the southern suburbs of Rouen, during morning Mass on Tuesday.

They took five hostages: the priest, two nuns and two parishioners. A third nun escaped and raised the alert.

The Rapid Intervention Brigade (BRI) arrived within minutes from Rouen, surrounded the church and closed off the area. The hostage-takers came out of the church and were shot dead in the forecourt.

When the police entered the church, they found the priest dead with his throat cut. Another hostage was critically wounded.

The church was swept for explosives. President Hollande and interior minister Bernard Cazeneuve visited the scene to congratulate the security forces and comfort the community. The population of Saint-Étienne de Rouvray is 27,000.

Speaking at the scene, Mr Hollande said France should “use all its means” in its war against Islamic State, against which France has launched air strikes in Syria and Iraq.

The president called it a “dreadful terrorist attack” and told reporters the attackers had pledged allegiance to Islamic State, also known as Isis.

“We are put to the test yet again,” Mr Hollande said.

“In the face of this threat that has never been greater in France and Europe, the government is absolutely determined [to defeat] terrorism,” Mr Hollande said in a televised address. 'Merciless'

Former president Nicolas Sarkozy, who is expected to enter a conservative primary for next year's presidential election, accused the Socialist government of being soft.

“We must be merciless,” Mr Sarkozy said in a statement to reporters. “The legal quibbling, precautions and pretexts for insufficient action are not acceptable. I demand that the government implement without delay the proposals we presented months ago. There is no more time to be wasted.”

The centre-right opposition wants all Islamist suspects to be either held in detention or electronically tagged to avert potential attacks.

The Vatican condemned the “barbarous killing”, saying Pope Francis was horrified by the news. “We are particularly shocked because this horrible violence took place in a church, in which God's love is announced,” Vatican spokesman Fr Federico Lombardi said.

He said the pope was feeling “the pain and horror of this absurd violence” and “condemned in the most radical way any form of hate”. On police radar

A local Muslim leader said one of the men who attacked the church was on French police radar and had travelled to Turkey. Mohammed Karabila, president of the Regional Council of the Muslim Faith for Haute-Normandie and head of the local Muslim cultural centre, said “the person that did this odious act is known, and he has been followed by the police for at least a year and a half.”

He said the attacker “went to Turkey and security services were alerted after this.” He had no information about the second attacker.

But a church is a highly symbolic target – Islamic State has specifically called on its followers to attack churches.

Relations with France's Muslim community have been especially tense since the Bastille Day massacre in Nice.

The anti-terrorist prosecutor has been assigned to the case.

In April 2015, Sid-Ahmed Glam planned to bomb a church in Villejuif, outside Paris. He murdered a young woman after commandeering her car and shot himself in the foot. News reports linked Glam with Abdelhamid Abaaoud, the Islamic State operative who is believed to have planned the November 13th attacks in Paris.

Since the present spate of jihadist attacks began in 2012, this is believed to be the first violence against a church or priest. Seven French monks from the monastery at Tibherine, Algeria, were beheaded, probably by the Armed Islamic Group, in the spring of 1996.