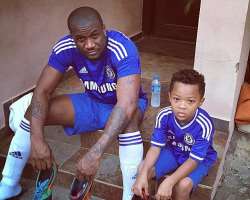 Singer, Peter Okoye, will be proud that since he was not able to play football, he now has an heir that will be towing that line of the round leather game which happens to be his son, Cameron.

Cameron is not just good in dancing as he has been able to learn some dance moves from his father, he is also a good footballer as he recently won an award from his football academy.

Peter has paid very close observation on his son's talent and has been able to discover that he has passion for football which made him enroll him early in an academy which is gradually paying off.

Cameron was being awarded the Top Scorer at Little Tigers Football Academy, as his father shares the good news. 'I'm so proud of my son for receiving a medal for Top scorer of his football academy."

Recall that Peter had made a stint in football and that gave him the opportunity of playing alongside with Mikel Obi while in Jos but since his calling wasn't in football, he switched to music which has placed him and his brother in spotlight today.