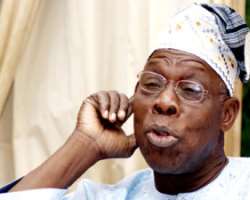 Jibrin alleged that the padding of the 2016 budget by N40 billion was done at a secret location with the backing of Yakubu Dogara and three principal officers including Deputy Speaker Yusuff Lasun, House Whip Alhassan Ado Doguwa and Minority Leader Leo Ogor.

At the Red Chamber, the Senate President, Bukola Saraki and his deputy are facing a two-count charge. They are accused of forging Senate Rules in 2015.

The former president had in 2012 at the fourth annual conference of the Academy for Entrepreneurial Studies, lashed out at the National Assembly and state Houses of Assembly describing them as institutions filled with 'rogues and armed robbers.'

He had described them as the leading institution amongst the nation's most corrupt and inefficient.

'Integrity is necessary for all systems and institutions to be strong. Today, rogues, armed robbers are in the state Houses of Assembly and the National Assembly. What sort of laws will they make?' he had asked.

In November 2014, Obasanjo, at the public presentation of the autobiography of Justice Mustapha Akanbi, in Abuja, said apart from shrouding the remunerations of the National Assembly in opaqueness and without transparency, the lawmakers indulged in extorting money from departments, contractors and ministries in two ways.

'They do so during visits to their projects and programmes and in the process of budget approval when they build up budgets for ministries and departments, who agree to give it back to them in contracts that they do not execute. They do similar things during their inquiries.'

Last January, Obasanjo listed corruption  in the National Assembly to include 'what they call constituency projects which they give to their agents to execute but invariably, full payment is made with little or no job done'.

The former president insisted that over the years, the National Assembly never singled out any corrupt lawmaker except where the executive led in the indictment of a member.

The senate yesterday failed to react to Obasanjo's allegations.

Senate spokesman,  Abdullahi Sabi, said lawmakers were on break and could therefore not comment on Obasanjo's claims.

'I have not heard what he (Obasanjo) has said. The Senate is on recess and I cannot make any comments on that issue. We are not even aware of what is being said. It is only when we are aware that we can make comments. The Senate is not aware, because we are on recess.'

Other senators contacted declined to make comments, but rather, referred our correspondent to the Senate spokesman. They said since the issue raised was about the entire National Assembly, they were not in any position to make comments. - The Sun.