Islamic Terrorism: Isn't It Time Up For Chancellor Merkel? 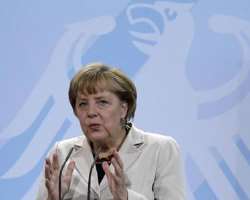 Hurrying up from a visit to Oxford Circuit from my brief window shopping tour of the imposing Westfield Shopping Complex in Stratford London, I chanced upon a free evening newspaper in the underground train station which attracted my attention because of the masterfully crafted style and the editorial approach the editorial team gave to the reportage on the events of the last few days in Germany with regards to Islamic terrorism.

Indeed in the last couple of weeks of my very brief vacation in the United Kingdom, the Evening Standard and the (Free) Metro Newspaper have become my compulsive best friends together with my daily glass of Expresso coffee even as I have always made it a ritual to pick up the free copies from the trolleys in the train stations where they are generously displayed for commuters to pick at no costs.

The story of terror attacks in Europe's most viable economy which is Germany has understandably enjoyed front page mention in most UK'S print media even as the Electronic Media have also devoted greater chunk of their prime news broadcast to cover the different ramifications of these growing threats of terrorism particularly because these murderous activities were exported by trained terror gangsters who infiltrated Western Europe in the guise of seeking for shelters as asylum seekers from the collapsed Nations of Iraq and Syria.

There are remarkably increased presence of armed Metropolitan Police who keep vigil at strategic points although not in the menacingly predatory fashion that Nigerians living within the front lines of terror attacks and other less volatile parts go through on daily basis from the police and other security forces.

Majority of these attackers in Germany particularly and even in France and Belgium have now been found to have pledged allegiance to the Islamic terror group known as Islamic State.

I'm actually fascinated that at this time that UK exited European Union after the last referendum which swept away Prime minister David Cameron due largely to fears and apprehension by the English people that the decision by the German Chancellor Ms Angela Merkel and a few other European countries to throw their borders opened has not only weakened the treaty on free movement by EUROPEAN UNION for only Europeans but has opened the floodgates for terrorists who masterfully disguised as refugees to infiltrate Western Europe and unleash mayhem and destructions of unquantifiable proportions.

The English voters were alarmed too by the terror attacks in France and Belgium associated with persons who hitherto were let into Europe because they claimed to be refugees from Syria and Iraq. Security near the border with France is at the highest level. Yours faithfully witnessed this on a visit Yesterday Sunday July 24th 2016 to a Beach not too far Canterbury around a place called Dover very close to France.

The attacks in France and Belgium affected some British families. But again whilst the United Kingdom voters through a slim majority opted to quit the European Union, Londoners voted to bring in the first ever Moslem Born immigrant Mayor Mr Sadiq Khan to take over from Boris Johnson who sperheaded the Brexit campaigns and is now the External Affairs Secretary of the British people under the parliamentary leadership of Premier Theresa May the Second ever female British Prime Minister in the last one hundred years. Theresa May has just visited Germany's first ever Female Chancellor Mrs Angela Merkel.

Ironically, the effect of the emergence of this Moslem mayor I'm told includes the sudden growth of Islamism in London just as people who spoke with me confirmed that gigantic Mosques have sprang up all over the major landmark areas of London and that the Moslems such as the immigrant communities from Pakistan, and Somalia have now become so daring and bold as to now install their loud speakers outside their Mosque building for calls to prayers which constitute noise pollution to some neighbors.

I saw one of these newly erected Mosque in the high street of Tottenham in London and during their Friday prayers last Weekend the entire neighborhood was littered with all manner of people from Somalia and Pakistan. You would think you were in Mogadishu if you had seen these cross section of Moslem worshippers I'm talking about who went about loudly and leasurely all over the place unmindful of the inconvenience they caused passers by. I had to cross to the other side of the street just to avoid colliding with the huge crowd of Moslem immigrant worshippers just coming out of the Mosque on this high street of London.

These sights and sounds made me conclude that if care isn't taken London may never be the same again unless something is done to maintain the peace and never let radical preachers to take hold of these new Mosques spreading up all over the neighbourhoods whereby Moslem immigrants congregate. It was indeed from these London Mosques that terror masterminds were radicalised by hare preachers. The Nigerian born underwear bomber caught in the United States of America and serving life sentence for attempted bombing of the Delta Airliner was radicalised in London whilst going to one of the most expensive universities where he was enrolled by his rich Nigerian elitist Dad Alhaji Abdul Murtallab who runs Nigeria's first ever Islamic Bank. Several hate Islamic preachers who openly radicalised the youths have also been extradited to the USA and to Jordan.

Anyway this is for another day. For now I'm asking if the facts emerging from the terror attacks in Germany aren't enough for Angela Merkel who let them in on humanitarian ground to quit and allow other strict nationalists organise Germany and rid it off of terrorists.

Angela Dorothea Kasner better known globally as Angela Merkel is 61 year old and a doctorate degree holder in Physics. She heads the Christian Democrats -a Conservative party that works in the Parliament with their Bavarian sister political party known commonly as the CSU.

The highly educated Ms. Angela Merkel is the first ever Female German Chancellor and the first to have won successive elections thrice and prior to the Europe's largest post World War 2 refugees' crisis which saw the floodgates of mass movements of people from some collapsed far distant nations like Afghanistan, Syria and Iraq was already planning to run for a historic fourth term in office by next year.

The France based agency reporters (AP) wrote as follows: "Four attacks in a week - three of them carried out by asylum seekers -have left Germans on the edge and Chancellor Angela Merkel's of welcoming refugees under renewed criticism. The unprecedented bloodshed began July 18th 2016 when a 17-year'old from Afghanistan wielding an ax attacked people on a train near Wuerzburg, wounding five people before he was shot to death by the Police. The Islamic State terror group claimed responsibility.

This is because the ISIS terror group has claimed responsibility for Sunday's attack near music festival in Bavarian city that killed suspect and wounded 15.

The British media as well as many other global media are reporting that a Syrian man who detonated explosives outside a music festival in the German city of Ansbach, killing only himself and wounding at least 15 people, had pledged allegiance to the Islamic State of Syria and the Levant group before the attack, according to a senior government official.

The 27-year-old suspect, who was a refugee, blew himself up late on Sunday after being denied entry to the event.

Joachim Herrmann, the interior minister of Bavaria, is reported to have stated on Monday that video footage discovered on the suspect's mobile phone showed him pledging allegiance to Abu Bakral-Baghdadi, the self-declared leader of ISIL, also known as ISIS, makes it clear the incident was a "terrorist attack".

He said the man, who has not been named, also "announced an act of revenge against Germans because they were standing in the way of Islam". Moments later, ISIL claimed responsibility for the bombing on its Amaq website, saying that the attacker was one of its "soldiers".

Bomb materials was found as reported by Al Jazeera's Dominic Kane, from Berlin, just at the journalist said: "He [the suspect] came to Germany two years ago and his asylum application was rejected last year for reasons that we don't know right at this minute. "He had been based in Germany with the knowledge that he was not going to receive permanent asylum in this country. He had twice before tried to take his life and, at some point in the recent past, he had been receiving psychiatric help." German police also said on Monday that they had found enough materials to make another bomb at the suspect's home, and several violent videos.

Germany as reported will boost its police presence at airports and train stations and carry out stop-and-search operations close to border areas, Thomas de Maiziere, Germany's interior minister, said in Berlin on Monday after four violent attacks in less than a week. The British and French security forces are stepping up the tempo of counter terror cross border vigilance.

"What seems particularly important to me at the moment is an increased police presence in public spaces."I have therefore ordered that the federal police visibly increase their presence at airports and railways stations and that there are random checks, which are not visible but very effective, in border areas", the Aljazeera news reported asserted.

The position of Angela Merkel in the face of these heightened terror attacks and the expanding frontiers of public panic in Germany is highly uncertainty as people are already calling on her to quit. These terror attacks have made Germany a laughing stock to the ridiculous extent that the Nigerian President Muhammadu Buhari who has failed to stop armed Fulani terrorists from killing farmers all over Nigeria was quoted as calling on Chancellor Angela Merkel to allow his government assist Germany to combat Islamic Terrorists.

The Republican Presidential Candidate Mr Donald Trump has just classified Germany as a place where Islamic terrorism has blossomed and that any German citizen visiting Germany should be investigated and issued clean bill of health as being terrorism free before being admitted into USA.

My dear German Angel known as Angela Merkel please your time is up since you are no longer the Guardian Angel of Germany. Please quit now for your indiscretion in letting in disguised Islamic Terrorists now killing your people is intolerable and disgusting.