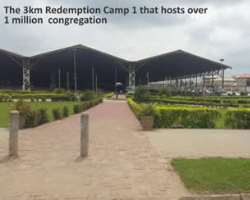 There was panic at a parish of the Redeemed Christian Church of God (RCCG) at Santos bus stop in the Isawo, Ikorodu, Lagos State, on Sunday after some gunmen walked in and abducted the pastor during the service.

It was learnt that the pastor, identified only as Bajomo, was whisked away by the gunmen, who came to the church as if they were new members.

Our correspondent learnt that the pastor, who was abducted around 7am, was the first to reach the parish and was preparing for a workers' meeting which usually preceded the Sunday service.

It was gathered that when the other members arrived at the church, the pastor was nowhere to be found.

Our correspondent gathered that the matter was reported at the Owutu Police Division.

A witness, who identified herself only as Esther, said the gunmen wore attractive clothes as if they had come for the church service.

She said, 'The pastor came earlier around 7am to prepare for a workers' meeting. The shocking thing was that the men walked in quietly like new members.

'They dressed like people who had come to church. They had Bibles with them. They did not shoot or display any weapon. It was when they got to the pastor that they brought out their guns and ordered him to come with them.

'The pastor got to the church before anyone else and only three members had arrived before the abduction.

'We discovered after they had left that they were Ijaw militants. They have taken away our pastor. Some members, after the incident, went to the pastor's house to inform his family members.

'It is a sad occurrence in our area that residents are being abducted, raped, assaulted and even killed every day. It is a problem that has been left to become a calamity.

'I think the state government and the police really need to do something about these recurring incidents. We are at the mercy of the Ijaw boys.'

Our correspondent learnt that the Sunday service did not hold at the parish as a result of the pastor's abduction.

The Lagos State Police Public Relations Officer, SP Dolapo Badmos, said she would get back to our correspondent on the matter.

She, however, had yet to get back as of press time.

He said the church would invite God's anger on those who troubled its members and pastors.

He said, 'RCCG will not take abduction or murder of our pastors and members any more.

'We like to warn murderers and abductors that God will show up with anger and fire. He will consume them speedily.'