Agric Trainees In Germany Vow To Turn Around Business In Osun, Nigeria 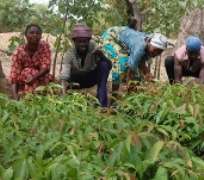 Exactly three weeks after leaving Osun, Nigeria and arriving in the State of Saxony-Anhalt for their three months intensive training in agriculture and food production technology, beneficiaries of the scheme have expressed high hopes that Nigeria’s fate lies in modern agriculture enterprises.

The beneficiaries, who shared their experiences with a German newspaper A-Z Online revealed how their three weeks already spent in Germany have shown that Nigeria’s economy had refused to grow because of the country’s over-dependence on oil.

The ongoing training is in furtherance of the collaboration between the State Government of Osun and the state of Saxony-Anhalt Germany. ‎

‎The training is in continuation of government’s drive to revolutionise agriculture in the state under the Osun Rural Enterprise and Agriculture Programme (O’REAP) and boost food productions for local consumption as well as export.‎

Adesuyi Fasola Michael and Adebayo Waheed Adekunle, both trainees, were quoted by the German newspaper as expressing satisfaction with their trainees, vowing that Nigeria and Osun in particular would feel their impact when they return to Nigeria.

Also in a statement by the Bureau of Communication and Strategy, Office of the Governor, Fasola was quoted as saying, “We are poised to take agriculture to a new height in our state,” said Fasola while stating that Nigeria’s potentials in agriculture have been lying untapped for ages.

Adekunle, who also spoke with the German newspaper, said when the new technologies are deployed in agric business, Nigeria will have a lot to learn from them.

“We are here for the future of our country. I am confident that this is the way to go if Nigeria must feed itself and as my Governor, Rauf Aregbesola tells all of us, a nation that cannot feed itself is on its path to perish. Our people must perish.”

The coast became clear for the youths who have been selected for the training when they rounded up their German Language training in Osogbo.‎‎

The completion of the language course under the supervision of a German Instructor, marked the end of the preparations for the journey aimed at producing the next set of technically skilled hands that who would advance the state in its agricultural business enterprises.‎

The youth numbering eighteen having arrived Germany like the first batch, spent three days at Kolping Training Institute in Hettstedt where they received orientation in simple cultural ethics of the Germans.‎

The Osun team after the 3 days orientation in Hettstedt was visited by the German Cooperative Farmers in continuation of their practical ways of modern agriculture.

Interactive session on how to make the experience of the visiting youths worth-while were held with the German farmers and the students were distributed, based on their areas of interest.

The trainees were handed over to the farmers at two per Cooperative Farmer with their theory training syllabus.

The trainees, like the first set, will undergo a four-week intensive course in agricultural training school, where they will be exposed to the rudiments of modern agriculture and food crop production techniques.

This will also be followed by another weeks of attachment trainings under different large-scale co-operative farmers in the State of Saxony-Anhalt to enable them learn more and build on the assessed capacities and interests they have acquired during the first four weeks of training‎.‎

He said, “I visited the Ministry of Agriculture in Saxony-Anhalt and was met by the Director for Foreign Partnerships- Mr. Mathias Willen Bockel.

“During the meeting, the Director showed me the congratulatory letter written to the new Minister of Agriculture of Saxony-Anhalt by Mr. Governor, Ogbeni Rauf Aregbesola and promised that the reply to this letter would soon get to Osun”.

Ogundipe held that the training programme is a success and recommended that the collaboration between the State of Osun and Saxony-Anhalt, Germany in the areas of agricultural development be encouraged.