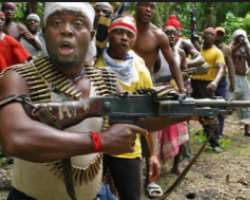 Militants under the aegis  the Adaka Boro Avengers have vowed to declare the Niger Delta Republic on August 1.

ABA, in a statement by ‘General’ Ed­mos Ayayeibo, said it has concluded ar­rangements to make the Niger Delta Republic a reality even as it ordered its people to return home

The group also told northerners and westerners to leave the Ni­ger Delta and eastern states immediately.

It also issued a quit no­tice to the military and all agencies belonging to the Federal Government to evacuate the Niger Del­ta states and the eastern parts without delay. Fail­ure to obey the order, it said, would lead to a total destruction of military per­sonnel and agencies.

According to the statement, “We, the Adaka Boro Avengers and all the free­dom fighters in the Niger Delta region have met and come to a conclusion that we are declaring the Niger Delta Republic three weeks from today.

“So we are by this notice calling on the Nigerian government to move out all military personnel and all government agencies out of the Niger Delta. Fail­ure will lead to destruction of military barracks and personnel.

“We are, also, by this no­tice calling on our fathers, mothers, brothers and sis­ters living in the northern parts of Nigeria to return home immediately.

“We are also warning northerners and western­ers to leave the Niger Delta region immediately within three weeks from now, for their own good.

“If they refuse to heed to our warning, we will use so many as example in the Niger Delta region on the due date.

“We are telling the Ni­gerian government that enough is enough and we are taking our indepen­dence by force. We have our foreign backers, so we are not afraid of the Nige­rian government but ready for total war.

“The inhuman treatment given to us by Nigerian government is enough. We can no longer withstand the suffering of our Niger Delta people. They should not take us for fools.”

Niger Delta Avenger (NDA) claimed respon­sibility for blowing up of many oil and gas operations of major oil companies in the Niger Delta region said its goal of destruction of oil and gas infrastructure was to actualise the soverign state of Niger Delta.

According to the group's spokesman Col. Mudoch Agbinibo, the NDA had spread across the Niger Delta to launch its currency, passport, rul­ing council, territory and flag.

“By October 2016, we will display our currency, flag, passport our ruling council and our territory to the world,” NDA said.