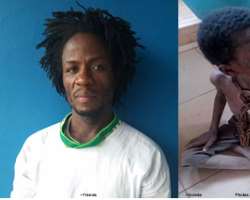 Francis Taiwo, a Celestial Church of Christ pastor who starved and kept his nine-year-old son in chains for months, has been arrested.

The 40-year-old pastor was apprehended by the police from the Onipanu division on Sunday at his church - CCC, Key of Joy Parish - in Ajibawo, Atan, in the Ado-Odo/Ota Local Government Area of Ogun State.

Police sources said that Francis might be charged with attempted murder, among other offences, after the completion of investigation.

'The pastor may be charged with attempted murder. His action was capable of killing the boy,' one of the sources said.

Our correspondent had reported that Francis chained his son, Korede, to the altar in the church for more than a month and starved him until he went into a coma in an attempt to cast out the supposed spirit that made the boy to steal.

Korede was, however, rescued on Friday during a joint operation by the Nigeria Security and Civil Defence Corps and the police, after receiving a tip-off from residents of the area.

Korede's stepmother, Kehinde, had also been arrested for allegedly aiding the cruelty meted out to the boy.

Korede, who said he aspired to be a doctor, had blamed his father for his stealing habit.

'It is true that I stole a pot of soup and a bowl of eba in our house. I also stole in the neighbourhood. My father's inability to give money to my stepmother for the upkeep of the family caused it. When I was chained, my father and stepmother fed me twice a day. Some days, I was not given any food. I want to go back to school because I want to be a doctor in the future. I do not want to go back to my father's house,' Korede had said.

Francis, a father of five who hails from Benin Republic, confessed to the act in his statement to the police, adding that Korede's mother was late.

He said, 'I was ordained a pastor in the CCC in 2012. I had divorced two wives, including Korede's mother, Maria; she is late now. She had four children for me - two boys and two girls - before she divorced me in 2007 after she gave birth to Korede. I chained Korede because he is possessed. An evil spirit makes him to steal. He needs deliverance. His siblings are not living with me.'

A resident, who identified himself only as Elijah, said Francis had been warned on several occasions against unleashing violence on the victim.

He said, 'His father has been chaining him for the past six months. He would chain him for hours and release him. His grouse is that Korede steals and runs away from home and he thinks a spirit is controlling the child. He once took him to a river in chains for deliverance.'

The Ogun State police spokesperson, SP Muyiwa Adejobi, said the case had been transferred to the child labour unit of the command for investigation.

'The case has been transferred to the Anti-Human Trafficking and Child Labour Unit of the command for necessary investigation and actions as directed by the Assistant Inspector-General of Police in charge of zone 2, AIG Abdulmajid Ali,' he said. - Punch.