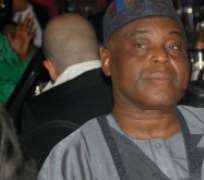 Dokpesi Campaign Organ­isation for National Chairman of the PDP confirmed on Sunday as the official launch of the campaigns being flagged-off in Benin City, Edo State.

According to the organisation, Dokpesi will commence his bid by first seeking the blessing of his royal father, the Okumagbe of Weppa – Wanno Kingdom, His Royal Majesty, George Eghabor before embarking on the official tour.

According to the campaign organisation,   the pur­pose of the tour is to personally meet with, listen to and address all the delegates of the party who shall be voting at the National Convention slated for August 17, 2016 in Port Harcourt.

High Chief Dokpesi as a point of principle believes that it is only through consultations with all stakeholders and delegates of the par­ty that a national leader who will understand and appreciate the pains and yearnings of the party members across the nation can emerge.

“It is in fur­therance of my democratic ide­als that return­ing power to the people must first begin with dis­cussions with the people”, High Chief Dokpesi said.