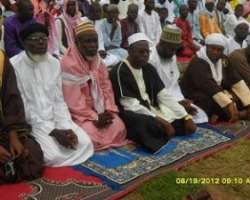 Several legal instruments promote the sanctity of human life and right to freedom of religion. Section 33 (1) of the Nigeria Constitution stipulates that "every person has a right to life, and no one shall be deprived intentionally of his life, save in the execution of of the sentence of a court in respect of a criminal offence of which he has been found guilty in Nigeria, while section 38 of the same constitution stipulates that"every person shall be entitled to freedom of thought, conscience and religion, including freedom to to change his religion or belief, and freedom (either alone or in community with others, and in public or in private) to manifest and propagate his religion or belief in worship, teaching practice and observance".Also Article 4 of the African Charter of Human and Peoples Right promotes the right to life and Article 8 the right to freedom of conscience, the profession and free practice of religion.

Unfortunately, recent events in the country have negated the provisions of these legal instruments which uphold the sanctity of human life. One of such events is the gruesome murder of a female evangelist, Eunice Elisha, in Abuja.

Elisha (42) and mother of seven, was reportedly waylaid during her usual early morning evangelism routine by criminals, who are suspected to be Muslim fanatics, who were alleged to have threatened her before over her preaching.

While the killing has generated widespread condemnation, the worrisome aspect of the episode is that religious intolerance is spreading to other parts of the country such as the Federal Capital Territory other than the North where it is strongly-rooted.

Elisha's fatal fate came on the heels of the brutal murder of a 74-year-old woman by a Muslim mob in Kano for alleged blasphemy. Before now, ethno- religious killings and conflicts have constitute a recurrent decimal in our nation's life .Recently,three Christians killed in Niger State , while a carpenter battered to near death in Kaduna for religious reasons.

According to reports,armed mobs attacked two churches in Gidan Waya and Sondi villages in Taraba State, killing 31 worshippers in 2015.Also, World Watch's report allegedly links the killing of 12,000 and destruction of 13,000 churches in Northern Nigeria between 2000 and 2013 to hate attacks.

On May 1, 1980, there were disturbances in Zaria during which property belonging to many christians were destroyed. In December 1980, a riot spearheaded by the deadly sect, Maitatsine in Yan- Awaku ward, Kano State claimed 118 lives and property were extensively damaged. The Kala- Kato and Maitatsine clash in Bullumkutu Maiduguri, Borno State in October 1982 claimed scores of lives and wanton destruction of property. During the time under review, Muslim demonstrators burnt down churches in Kano.

At Dobeli ward in Gombe in the first quarter of 1984, a crisis spearheaded by the Maitatsine sect claimed 568 lives and wanton destruction of property. In March 1986, Muslims and Christians clashed during an Easter procession by Christians. There were clashes between Muslims and Christians in March 1987 at College of Education, Kafanchan, Kaduna State. In the same vein, waves of religious riots in different locations in Kaduna in the same March 1987 witnessed loss of lives and destruction of property. Religious riots among students at Kaduna Polytechnic in 1988 resulted to the destruction of the foundation wall of the Christian Chapel.

It will recalled that a quarrel between a Fulani man and Sayawa meat seller in Tafewa Balewa, Bauchi State in 1991 later assumed a religious colouration resulting wanton destruction of property and loss of lives. A peaceful protest initiated by the Izala sect in 1991 to halt Rev. Reinhard Bonnke's crusade in Kano snowballed into a full blown riot resulting to wanton destruction of property and lives .In May 1992 in Zangon Kataf, Kaduna State, a feud between the Kataf and Hausas later assumed Muslim- Christian riot in other major cities of the state which resulted into destruction of lives and property.

In December 1994, a christian was beheaded in Kano for allegedly desecrating the Quran. A clash between the Hausas and Igbos in Kano in1995 triggered burning of houses, churches, shops, and killing of innocent people. In February 2000, Kaduna exploded in conflagration as Muslim and Christian extremists clashed over the proposal to introduce Sharia.

The list of religious conflicts which have claimed wanton property and lives in the Nigerian history is inexhaustible. Every now and then, Nigerians are treated to gory sights of murder with religious undertones. It will not be out of place to suggest here that Nigeria's unity is on the precipice considering the geometric progression in which these religious hates are spreading.

A non- profit organisation in its 2016 World Watch ranking that highlights where Christians are persecuted on a scale ranging from extreme, severe and moderate to sparse, rated Nigeria as severe and was 12th out of 50 countries. In the views of pundits, the ranking is not only embarrassing but terrible. Our Constitution guarantees that" the Government of the Federation or any State shall not adopt any religion as State Religion".

The timing of these religious- related killings is ill considering the obnoxious activities of the Fulani herdsmen who are rampaging several locations in the country. The episode becomes worrisome in the face of the insurgency in the North East which has constituted a serious clog in the wheel of progress of the country.

Indeed, the times call for concerted efforts. All hands should on deck. It calls for the strengthening of our institutions which are more or less dead. There are several unresolved murders in this country and the current situation should go beyond the usual mantra of "bringing the perpetrators to book"by our security agencies to concrete actions. There should a collaborative effort among the government, security agencies, the media, and other stakeholders to put this monster to bay. For the Christians, the following statement by Open Doors:" When hatred and revenge is promoted, Christians remain the keepers of hope for humanity", beckons.