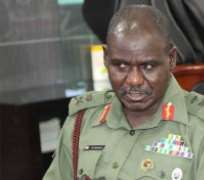 In a twist to President Muhammadu Buhari's order for the probe of two former Chiefs of Army Staff, Lt.-Gen. Azubuike Ihejirika and Lt. -Gen. Kenneth Minimah, and 52 others, over arms procurement scandal, some retired military officers and other Nigerians have said that the probe should be extended to the Minister of Interior, Lt. -Gen. Abdulrahman Dambazau (retd.), and the current Chief of Army Staff, Lt.-Gen. Tukur Buratai.

They questioned the exclusion of Dambazau and Buratai from the list of those to be probed when the chief of army staff was the Director of Military Procurement during the period the arms scandal was alleged to have been committed.

They said the call for Buratai's probe became more necessary given the revelation that the Chief of Army Staff bought $1.5m properties in Dubai with “stolen money.”

According to them, Buhari's fight against corruption will appear to be one-sided if Buratai is left in his position and not being probed in spite of the allegations against him.

President Buhari had ordered the probe of 54 persons, including Ihejirika and Minimah for their roles in the arms scandals that saw billions of dollars meant for the procurement of arms for the Nigerian military for the prosecution of the war against Boko Haram insurgency diverted to private pockets.

The move had followed Buhari's approval of the recommendation of the Presidential Committee on the Audit of Defence Equipment Procurement in the Armed Forces led by AVM Jon Ode (retd.).

However, the retired military officers said the President's war against corruption should be impartially prosecuted. One of them, Col. Kunle Falayi (retd.) expressed support for the ongoing anti-graft war, but urged the President to ensure that it was not one-sided.

Falayi said, “But if it is true he (Buratai) has stolen money or that he partook in the mismanagement of the arms funds, there should no reason why he should be exempted from being probe.

“He should be invited for probe if he has stolen, but if it is found that he has not stolen any money, he should be allowed to continue with his work.”

On the allegation that Buratai's total emoluments since he was commissioned in the Army could not support the mansions he bought in Dubai, Falayi said, “Buratai should be able to explain how he got the money with which he bought the properties. I have nothing against that; he should be made to explain the source of the money. All I know is that I support President Buhari's war against corruption, but the war should be total; nobody suspected to have stolen public money should be exempted from probe.”

Another retired military officer, Col. Tony Nyiam, who commended Buhari for creating the condition engendering the probing of departments of the Federal Government used to be treated as “sacred cows”, however, said it would be unfair to leave out Buratai from the probe.

“The Director of Procurement within the period being investigated should certainly be asked to help enquiry or be called in as a witness to give more information or as someone whom the allegations against him should be checked. In other words, the probe has to involve him.

“The President has an opportunity to show that his war against corruption is not biased because there are so many allegations in the air.”

In the same vein, a former military administrator, who spoke on condition of anonymity, faulted how Buhari is handling the allegations against Buratai.

“There is no doubt that the anti-corruption war is a one-sided campaign, but even beyond that, there is the issue of lopsided appointments and nepotism in Buhari's government,” he said.

A former Commissioner of Police in Lagos State, Alhaji Abubakar Tsav, who also described the source of Buratai's wealth as unexplained, asked that the army chief should be probed.

Tsav said the impression given by Buhari's government so far showed that the administration had been using double standard on the anti-corruption issue.

He said, “People are saying that Buratai declared his assets with the Code of Conduct Bureau, but even if he did, how did he get the whopping sum of money to acquire the property in Dubai? How much does he earn in a year?

“These things are unreasonable; the government is giving the impression that it is being partisan and taking sides.

“He (Buratai) should be investigated. If Minimah and Ihejirika will be investigated, Buratai should also be investigated so that we can know the truth. And if the government knows what we don't know, it should lay it bare to members of the public so that it will be left to the court of public opinion to recommend to the government but taking sides is not good enough.

“If a President comes to serve, he takes the oath that he is going to be fair to all manners of people, so he should be fair to all manner of people. The government said it found huge funds in the farm of a person but it has not told us whose farm it is. We want to know. Is the man a soldier or a politician?”

Recently, an editorial of July 10 edition of Sunday PUNCH, had described the situation as “a major credibility test for the President's campaign against corruption.”

It said, “President Muhammadu Buhari's fledgling war on corruption has reached a critical juncture. In a case that has generated outrage, the Chief of Army Staff, Tukur Buratai, has been accused of buying two houses in Dubai, United Arab Emirates, at a cost of $1.5m.

“Curiously, the Nigerian Army has admitted that Buratai, indeed, owns the assets, saying, however, that he bought them with his savings in 2013.”

But some of the retired military officers, who spoke to Saturday PUNCH officers and some online commentators, have also questioned the exclusion of the Minister of Interior, Lt. -Gen. Abdulrahman Dambazau (retd.), from the list of persons to be probed.

According to Nyiam, who called on Buhari to probe all persons in his government with corruption allegations against them, “many of the contracts being looked at had their genesis in the period that Dambazau was Chief of Army Staff.”

He said, “So as to avoid accusations of double standard, the period when President Umaru Yar'Adua was ill should be looked into because there was much stealing and corruption as the Commander-in-Chief was not well.

“If not added, it would make the fight against corruption questionable and it will make it look one-sided. It will be as if it is only the Chiefs of Army Staff from the South that are being probed.”

Also, on the PUNCH website, some of the comments trailing the report: 'Arms scandal: Buhari orders probe of Ihejirika, Minimah, 52 others', accused the Federal Government of bias by leaving out Buratai and Dambazau in the names of people to be probed over the arms scandal.

A commentator, General Sam Bockerie, said,“So how did Lt. General Abdulrahman Dambazau become the only former Chief of Army Staff who has no explanation to do? What did he do differently? Or was he left off the hook because he is a northerner?

“Where is Colonel Jafaru Isa that was arrested and released on the grounds that he refunded some National Security Adviser office's funds? Didn't former Chief of Air Staff,  Air Marshal Adesola Amosu (retd.) – a Yoruba man, also refund money? Why is Amosu being prosecuted while Jafaru is walking around a free man? Your guess is as good as mine! What about Tukur Buratai that 'saved' so handsomely to buy foreign properties in his wife's name? Anti-corruption war indeed!”

Anti-graft war should not be sectional – Afenifere

A socio-political organisation, Afenifere, on Friday deplored the non-inclusion of Dambazau and Buratai in the arms scam report released on Thursday.

Afenifere said the non-inclusion of the two Generals gave an impression that President Muhammadu Buhari's anti-graft war was sectional.

Secretary of Afenifere, Mr. Yinka Odumakin, said the duo should be investigated

“If there are allegations against Buratai and Dambazau, they should be investigated alongside their colleagues so that the impression is not created that we have unequal justice.”

Also, a Second Republic member of the House of Representatives, Dr. Junaid Mohammed, has said that Danbazau and Buratai cannot be exempted from the arms purchase probe.

Mohammed spoke in a telephone interview with one of our correspondents on Friday.

He said, “I still believe that it will be gross injustice for Danbazau and Buratai to be left out of the list of those to be probed.

Anti-graft fight non-discriminatory -FG
The Federal Government said there was no truth in the insinuation that the report of the Presidential Committee on the Audit of Defence Equipment Procurement was doctored.

In a statement issued in Abuja on Friday by his Special Adviser, Mr. Segun Adeyemi, the Minister of Information and Culture, Alhaji Lai Mohammed, said what had been released so far was the report of the audit covering the period 2011 to 2015.

He added that the committee would commence the audit of procurement from 2007 to 2010 as soon as the necessary documents were available.

The minister said, ''When the documents regarding procurement from 2007 to 2010 are available and scrutinised, the committee will then issue its report on that. The audit is being done on phases, and the report that was released on Thursday is the third of such.''

He stated that the Federal Government's anti-corruption fight was non-discriminatory.

He said, ''No one should attempt to distract from the seriousness of the issues involved in this audit of defence equipment procurement. It is important to note that even though the total amount spent for procurement and operations within the period were N185,843,052,564.30 and $685,349,692.49, the irregularities in the awards ensured that the military did not get value for money, with very serious consequences.''