‘Do Not Fall Victim to Scammers!’ Faithia Balogun Warns Nigerians 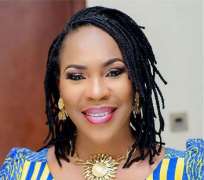 Veteran Nollywood actress Faithia Balogun cried out to her fans to be wary of imposters using her brand to extort unsuspecting victims in a recent post on social networking platform.

In an attempt to prevent future occurrence, Faithia posted a screenshot of her official Facebook page with the caption below; My dear fans, I've received complaints countless times concerning impersonators and scammers using my name and brand to extort unsuspecting individuals on social media platforms. This has been going on for a long time and I'm using this medium to appeal to you; there is only one authentic Facebook account operated by me - the picture is above and that is 'Faithia Balogun' ( www.facebook.com/OfficialFaithiaBalogun ), which I opened recently. I apologize to my fans who have been duped by these scoundrels. I love you all and don't want any of you to fall victim anymore. You can also follow my official Instagram; @FaithiaWilliamsBalogun, my Twitter; @FaithiaWBalogun. Love always.

Faithia Balogun has recently been nominated in the Best Actress of the Year (Yoruba) & Personality of the year category at the 2016 City People Awards.