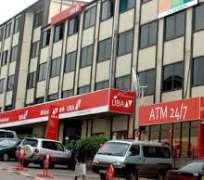 In the face of the debilitating economic environment in the country, United Bank for Africa Plc has maintain strong financials to retain a ‘B’ rating by Fitch International, one of the foremost global rating agencies.

Fitch affirmed UBA’s  viability rating at “B”, as the pan-African banking group continue to sustain its benchmark asset quality and strong profitability amidst industry and macroeconomic challenges.

According to Fitch,  UBA is one of the few banks with strong risk management framework, which has helped keep non-performing loans ratio at a moderate level of 1.74% as at the end-March 2016, as against industry average of over 6%.

This is the position of Fitch in its latest report on Nigerian banks.

Fitch also upgraded UBA's outlook to stable from Negative, thus reinforcing the strong outlook on the Bank, especially as its diversified network across eighteen other African countries make it relatively immune  against the potential cyclical volatilities in any of its country of operations.

The bank had also received good evaluation from the  foremost local rating agency in Nigeria, Agusto & Co,  which upgraded the Bank's rating from “A+” to “Aa-“, with a stable outlook. According to Agusto & Co, “the rating of United Bank for Africa Plc (UBA) is upheld by the Bank's improved capitalization, good liquidity and large pool of stable deposits, strong domestic presence supported by the Bank's extensive branch network and growing alternative banking channels.

“We note improvement in profitability and the Bank's good asset quality. The Rating takes into cognizance the weak macroeconomic climate on the banking industry's asset quality, which we do not expect UBA to be excluded. Nonetheless, we note positively its diversified geographical reach, which will cushion to an extent the impact of the weak Nigerian economic climate,” Agusto & Co stated in its credit rating report.

Just as the credit rating agencies are strong on the fundamentals of UBA Plc, equity analysts have also affirmed the asset quality, profitability and broad investment case of the Bank, particularly as UBA has maintained an average return on equity of over 20% in the past three years, bucking the challenging economic environment and dwarfing peer performance track.

Following the strong financial performance of UBA in the first quarter of 2016, improved transparency and disclosure, which is now seen as benchmark for Nigerian banks, analysts at Renaissance Capital and CSL Stockbrokers (a part of the FCMB Group) upgraded the rating on UBA stock to “Buy,” with target prices of N9.40 and N7.21 respectively.

Reflecting investors' conviction in the strong fundamentals of the Bank and the appetite for the stock, the share price has gained 39% thus far in 2016 to rank as the best performing banking stock on the Nigerian Stock Exchange. Closing at N4.70 on Wednesday, 13 July, 2016, UBA still trades at significant discount to analysts' consensus valuation of the shares, which is put at N8.50 for the 2016 calendar year.

The Bank paid N0.20 interim and N0.40 final dividend in 2015 financial year and should currently be auditing its 2016 half year results in line with the Group's governance culture of auditing results twice in a year. UBA is audited by PricewaterhouseCoopers, one of the global big-4 audit firms, which subjects clients to a rigorous international best audit practice.

United Bank for Africa Plc (UBA) is the third largest lender in Nigeria and a leading provider of financial services across 19 African countries, and with presence in New York, London and Paris. The Bank serves almost 11 million customers across expansive brick and mortal branches as well as diversified alternative electronic banking channels.

UBA has a diversified shareholder base of over 270,000, with some of the greatest global fund managers as well as multilateral institutions like the International Finance Corporation (IFC) and African Development Bank (AfDB) being shareholders of the Bank.