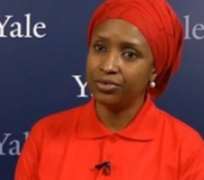 The Federal Government on Tuesday announced the appointment of Ms. Hadiza Usman as the Nigerian Ports Authority.

Usman, who until her appointment was Chief of Staff to the Gover of Kaduna State, Malam Nasir el-Rufuai, becomes the   first female Managing Director of the maritime agency.

She was the chief convener of the 'Bring Back Our Girls,' the group campaigning for the rescue of the over 200 school girls abducted from Chibok Secondary more than two years ago.

t President Muhammadu Buhari had approved her appointment as a replacement for Habib Abdullahi who was sacked from the position for a second time.

The  Director of Press of the Federal Ministry of Transportation, Mrs. Yetunde Sonaike, in a statement confirmed the appointment.

According to the statement,  “Hadiza Usman was born on 2nd January, 1976 in Zaria, Kaduna State. She holds a B.Sc. Degree in Business Administration from Ahmadu Bello University, Zaria and a postgraduate certificate in Development Studies from the University of Leeds, United Kingdom in 2009. “She began her career with Centre for Democratic Development and Research Training Zaria, a non-governmental organisation in June 2000 as a research assistant. “She worked at the Bureau of Public Enterprises from July 2000- August 2004 as an Enterprise officer.”

It added that she was hired by the UNDP for the Federal capital Territory Administration from October 2004 to January 2008 as a Special Assistant to the Minister on Project Implementation. She worked as the Director of Strategy of Good Governance Group, a non-governmental organisation from 2011 to July 2015. From July 2015, she was appointed as Chief of Staff to the Governor of Kaduna State, a position she held until her present appointment.