"I will beat you up, ….. impregnate you and nothing will happen.” 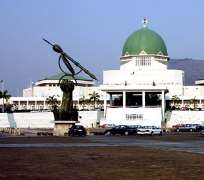 The revered hallowed chamber of Nigeria Parliament will be speedily dragging self to the mud if the alleged utterances of some members are confirmed to be true. It is no longer a gossip that many Nigerians have very low regard to many National lawmakers.

Innumerable scandals have plagued members of the National Assembly to the utter embarrassment of those that elected them and of course to the international observers and analysts of Nigeria affairs. If they are not exposed soliciting for bribery, they are captured on camera in far away USA, soliciting for sex even though they maintain a retinue of wives, concubines and girfriends.

Today, many of them are categorized as "National embarrassment". How else would one describe a supposedly distinguished Senator emmiting such foul immoral utterances against a married female member of the House.

My concern and that of many sane Nigerians is the alleged part that Relates to imagining to impregnate another man's wife ......and nothing Will happen...". This decayed throw-up must have certainly emerged from a decayed, rotten empty being. The National Parliament may have been defacated upon severally but not to this height. The alleged Statement in itself is "pregnant" . We shall all wait to see its progression.

Our Distinguished and Honourable members of the National Assembly who have insisted on being decent, upright and doing the right thing, we salute your courage and struggle in putting up with these "strangers".