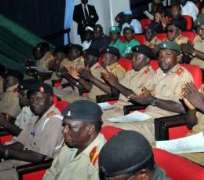 Nigerian Association of Ex-Service Pensioners‎ has advised its members to stay away any form of protests issued over non-payment of pensions amidst dialogue with Government.

This was made known by the President of the Association, Prince Ahmed Zubair(Rtd) at a press conference, on Tuesday in Abuja.

He said that the Association has been dialogue with the government through the Defence Headquaters on areas in which the military pensioners have been shortchanged since 2003, and the government has agreed to take adequate action to remedy the various pension anomalies.

The president, held that based on the agreement, the proposed protest being staged by a group led by one Rtd. Lt Col Azubuike Nas is not logical at this time, as the current government deserves to be given time to attend the issues already presented to them by the Association.

"Fortunately, part of Government's concession to us is the implementation of the 20.37 percent which was illegally deducted from the original 53.37 percent.The Government has also promised to look into the possibility of paying the remaining six quarters of the 33 percent arrears in two instalments to pave way for the next salary review which is already overdue,"

in closing, Rtd Col Zubair said the association do have reasons to protest but would only do so when it is necessary.