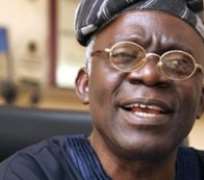 Human rights lawyer, Mr. Femi Falana (SAN) said on Sunday the revelation of the $1.5 million  owned by the Chief of Army Staff, Lt.-Gen. Tukur Buratai, is a dent on the ani-corruption fight of  President Muhammadu Buhari administration.

Falana wants Buhari to sack the Chief of Army Staff,  if he fails to voluntarily resign following the revelation that he purchased properties worth $1.5m in Dubai.

The activist lawyer, in  a statement on Sunday, said that despite Buratai's commendable feat of leading the Nigerian Army to defeat Boko Haram in the North East, the war on corruption was also a must-win for the Buhari Administration.

He  ‎described as a “cock and bull story” the explanation by the Nigerian Army authorities that Buratai paid for the properties in installments through his personal savings.

According to him, it is regrettable that the name of the Nigerian Army had been “illegally” used to ‎defend the Buratai in the unfolding scam.

While condemning  the Nigerian Army for defending Buratai, he said no one has yet to explain to Nigerians how an army General could manage to save $1.5m.

‎He said, “In view of the ban on the opening and operation of foreign accounts by public officers, the Code of Conduct Bureau should be involved in the investigation.

“If the Chief of Army Staff does not deem it fit to resign forthwith President Buhari should not hesitate to remove him in the interest of national morality.”

Falana commended the Buhari Administration for how it has handled cases involving military officers allegedly involved ‎in the diversion of the sum of $15bn meant for procurement of arms.

The diversion of the fund, he explained allowed the Boko Haram insurgents to kill about 25,000 Nigerians and displace two million others, including children.

He also said since the administration had assured Nigerians that there would be no sacred cow in the fight against corruption, Buratai should step down and allow a full scale scale investigation by the Arms Procurement Panel and the Economic and Financial Crimes Commission.

But a group has The Centre for Social Justice, Equity and Transparency disagreed sharply with Falana’s view.

CSJET,  in a statement on Sunday by its Executive Secretary, Comrade Ikpa Isaac,  expressed regrets that the foremost human rights lawyer unwittingly fell into the trap of speaking for those that want to buy time for Boko Haram to regroup or has simply exposed himself as part of the nation's problem since only those that are opposed to the defeat of the terrorists and the exposure of their sponsors are the one's demanding Buratai's sack.

According to the statement, “For a man who mounts stiff defence of clients accused of corruption, Falana's statement that accused, tried, condemned and sentenced the COAS to a sack in one breadth smacks of double standards and raises questions about the positions he had earlier taken on other national issues. It is not surprising that this is the path Falana is taking considering his recent encouragement to the Economic and Financial Crimes Commission to disregard the immunity of a sitting governor without regards for the impasse that could result therein.

“The allegations that the renowned lawyer is putting his governorship ambition in Ekiti state above public interest is finally being proven since those that allocate tickets in the All Progressives Congress  have earlier been fingered in the plot to oust Buratai from his current post. It is also becoming a certainty, given the intensity of this campaign of calumny that the incumbent COAS is merely a pawn to these people that are desperate to decimate persons they perceive as loyal to President Buhari so that they can fill the resulting vacuum with their own henchmen.

“We are also not surprised that their vituperation came on a day that the military made one of its most decisive strikes against Boko Haram, killing 16 terrorists, capturing two alive and seizing highly sophisticated weapons from the terrorists. In a curious coincidence, Falana issued his statement on the same day as several NGOs that are known to answer to the APC power block he is sucking up to for the governorship ticket issued similarly worded statements. The coordination was perfect to the point that there were supporting newspaper editorials.

“Falana and his co-travellers have in reality become threats to the civil society movement in Nigeria; Gani Fawehinmi will in no doubt be terribly bitter in his grave that his compatriots have abandoned the core issues of humanity, which he fought for his entire life, and have gone to dine with the devil.“They also interpret the constitution like pastors who are out to make money from the congregation not minding if they tell the truth or not. This is indeed a very risky dimension that persons with clout in the society must not ply.”