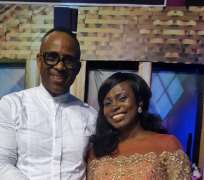 “A virtuous woman is a crown to her husband-Proverbs 12:4 and A gracious woman retainth honour; and strong men retain riches”.-Proverbs 11:16

These two scriptures above described the good demeanor of Pastor (Mrs.) Christy Idahosa,the assistant General Overseer of Illumination Assembly. The soft-spoken and well-adorable female preacher has over the years, shows her magnitude of love towards her beloved husband and Illumination Assembly members.

In Proverbs 18:22 says “He who finds a wife finds a good thing and obtains favour from the LORD”, which Isaac Idahosa found a wife over two decades ago and obtained not just absolute favour but mercy of grace in His Kingdom. As an inspirational singer, she has able to showcase her gracious talent for God and ready to display it till eternity. There are 50 golden things about Christy Idahosa,a woman of inestimable value in Christ.

#She is a soft-spoken woman personality of the 21st century.

#She is a role model to singles and married couples in Nigeria.

#Pastor Christy Idahosa is an inspirational singer to the core.

#She appreciates every good works in the House of God.

#She is a woman of pride and substance when it comes to African traditional woman.

#She is the source of Bishop Idahosa meteoric rise in ministry.

#She is a passionate speaker with meekness.
# She is a teacher of the word of God.
# She is a song writer and composer.
#She is a great woman co-ordinator of the century.
#She is a well-behaved General Overseer’s wife.

#She does not look down on people.
#She is a caring mother to the core.
#She respects her husband’s principles.
#She is not an extravagant woman but the one that wants others to benefit from her husband’s blessings.

#She welcomes everybody to her home without altercation.

#She is ever-smiling woman with love for the poor.
#She has inculcated moral values for her biological children.

#She has an angelic voice.
#She is passionate in winning souls for Christ.
#She has vast knowledge of her husband��s calling.
#She manages her home well.
#She has extraordinary gift of God.
#She looks younger than her age.
#She has a glowing legacies.
#She is a simple personality but firm in decision-making.

#She wants the best for her beloved husband.
#She is a woman of adorable beauty.
#She is neat.
#She is punctual to church activities.
#She is not socialite but prefers to be in the house of God.

#She is a testimonial gift to her husband.
#She is not a selective woman but the one that has evangelical knowledge of winning souls for Christ.

#She respects African culture.
#She is an eloquent speaker to the core.
#She is not carried away by the things of the world.

#She is an avid reader of good books.
#She is a well-educated woman.
#She is humble and intelligent.
#She has love for good business.
#She has trust for her husband and children.
#She is a patient wife.
#She is a resolute woman that wants the best for her children and church members.

#She is a good adviser.
#She is technologically inclined with modern-day ministry works.

#She is a magnanimous giver.
#She cares for the growth of Illumination Assembly.

#She is from a decent family.
#She has respect for ministers of God.
#She likes good Christian music.
Mindset Media Limited and Gabrio Voice Magazine once again celebrates your golden age.May God continue to protect you in Jesus Name Amen.