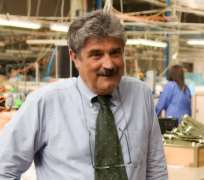 The engineering company is a global leader in the production of special materials and rubber products for the worlds of defence, aerospace and aviation. It is involved in the most important international defence and aerospace programmes such as the F-35 and the Eurofighter Typhoon combat aircraft and the ExoMars mission looking for signs of life on Mars.

Aero Sekur SpA, one of the biggest European producers of fabrics and rubber technology for the aerospace and defence sectors, reported a 12% increase in turnover in 2015, driven by a major order for maintenance equipment for the F-35 combat aircraft.

The engineering firm is a global leader in fabric manufacturing for the worlds of defence, space and aviation and it is involved in some of the biggest international projects in these sectors, such as the F-35 and Eurofighter aircraft and the ExoMars mission which aims to search for life on the planet Mars.

“The 2015 figures show that investments in research and development were critical for the growth plan,” said Aero Sekur Chief Executive Marco Borghesi. “The sales increase is driven mainly by the defence sector, with the acquisition of an important order to produce maintenance equipment for the F-35. Government cuts to defence spending did not affect equipment for personal defence, such as protective suits, gas masks and ballistic jackets. The company also launched a strong internationalisation drive, increasing its client portfolio on the global scale,” he said.

The company is controlled by Aero Sekur LTD, an English holding company owned by the Tosca Penta fund (54%) and institutional and private investors

The company has embarked on a research and development plan, investing more than 12 million euros in the last five years, which has allowed it to consolidate its presence in the international market. Aero Sekur is also involved in some of the biggest aerospace and defence projects financed by national and international institutions, in collaboration with the main players in the sectors.

Its strong results have attracted the support of the Agency for the Promotion of European Research, which has described Aero Sekur as a “virtuous example”, being the only small or medium sized aerospace company to have won three international contests in the first year of Horizon 2020, the European Commission programme which finances projects for research and innovation up to 2020.

Presence in Italy
Aero Sekur, founded in 1968, has its headquarters in Aprilia in Italy’s Lazio region. Since 2001, the current chairman Silvio Rossignoli has pursued a programme of innovation and diversification. Alongside the firm’s traditional product, the parachute, Rossignoli has developed the most sophisticated range of products and services for the worlds of defence, space, and aviation, aimed at ensuring the survival of defence and security forces and supporting the efficiency of helicopters and both civil and military air and ground vehicles. Products and services are based on avant-garde software and technology and innovative materials, including special fabrics and rubber.

The most recent initiatives were launched after winning a major order from Northrop Grumman in 2011 to produce “inflatable hangars” for the F-35 fighter jet. An inflatable hangar is a structure that covers the airplane for “on the field” maintenance, accompanied by air conditioners that make it possible to work in different climates, from desert to arctic zones.

Life-saving applications
Research efforts have also led to new applications in aerospace and defence. From inflating flotable systems for helicopters – gigantic airbags – in the case of landing on water, including rafts for the crew, to flexible fuel tanks for armoured vehicles and helicopters. If this type of fuel tank is hit by a bullet, its valve shuts off in a few moments, to prevent fuel leakage that could start a fire. For example, when a Mangusta helicopter of the Italian armed forces was hit in Afghanistan, the fuel tank shut off, the aircraft was able to continue the flight and the crew were saved.

“Everything we produce has something to do with textiles and air. Four floating systems keep a seven tonne helicopter afloat,” said Chairman Silvio Rossignoli.

High resolution photos of the company are available for download at the following link: