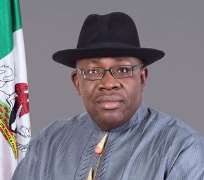 Governor of Bayelsa State, Hon. Seriake Dickson, over the weekend disclosed that, machinery has been put in place to restructure the economy of the state, with a view to turning it around for the overall good and prosperity of the State.

Giving the assurance, the Governor stated that, the efforts of the Government in this direction would begin to manifest soon to the full glare of Bayelsans.

The Governor, who was speaking at a special thanksgiving Church service marking the 70th birthday anniversary of Hon. Fyneman Wilson, his Special Adviser 1, on Political Affairs, at the Greater Evangelism World Crusade Church, Sagbama, explained that, the restoration administration, which he heads, has not only built infrastructure across the state, but ensured development in every other sector.

According to him, the present state administration believes in God and the efficacy of prayers, which has changed the face of Bayelsa, while also describing the celebrant as not only a political adviser, but a father figure, pointing out that, Fyneman Wilson has served his people meritoriously, since he knew him and deserved to be celebrated.

Governor Dickson wished the celebrant many more years of good health and prayed for other leaders, who are 70 years and above to be strong as well as continue to display good leadership qualities that, would impact positively on the younger generation of Bayelsans.

In his words “I want to thank God for the life of Fyneman Wilson, who is not just 70 years, but still waxing strong. On behalf of the government and the people of the state, I wish you a happy birthday and many more prosperous years ahead.

In his exhortation, Pastor Saviour Agoro, zonal minister of the Greater Evangelism World Crusade, Sabgama zone, admonished Christians to lay their treasures in heaven, as everything sowed on this earth is temporary, pointing out that, making heaven should be the ultimate goal of every Christian.