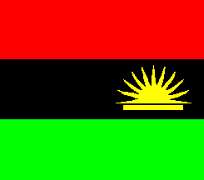 Retired Major General Muhammadu Buhari and his Department of State Services (DSS) have once again failed woefully in their spurious attempt at criminalizing Biafrans and branding the Indigenous People of Biafra (IPOB) a terrorist organization. In an incoherent and error-filled statement sent to the media, the DSS stated that “sequel to increasing threat posed to public peace by the activities of the Independent [sic] People of Biafra (IPOB), this Service arrested one Chidiebere Onwudiwe, a graduate of mechanical and chemical Engineering and known member of IPOB, on 22nd June, 2016.” The stark illiterate-filled DSS in their statement further noted that “Onwudiwe and his associates within and outside the country, were planning to carry out coordinated attacks against religious bodies/edifices, police check points and the Computer Village in Ikeja, Lagos State, with Improvised Explosive devices (IEDS)” and that “The suspect was apprehended while making logistics supplies for their nefarious plan.”

First of all, let us just point out only two out of the several errors in this pack of lies from the DSS’ statement; (1) We are Indigenous People of Biafra (IPOB) and NOT “Independent People of Biafra”. Even in the records of all the court cases concerning the illegal kidnapping and unconstitutional prosecution of our leader, Mazi Nnamdi Kanu to which the DSS have been part of, there was no place where the word “INDEPENDENT” was used and (2) At which University in Nigeria can someone graduate in both Mechanical Engineering and Chemical Engineering at the same time? Even in the more advanced countries it is very difficult to achieve such a feat not to talk of the Buhari’s run-down universities in Nigeria.

It is laughable that the DSS is accusing IPOB of posing increasing threat to public peace while they have not made a single official statement concerning the mayhem and havoc being exhibited everyday by Boko Haram and the so-called Fulani herdsmen. Up till today, the DSS has maintained stoic silence on the killings at Agatu and Nimbo.

Perhaps those killings do not pose threats to public peace because the people killed were “infidels” that deserve to die as they are not of the Hausa-Fulani Islamic blood. It is very interesting to know from the DSS that IPOB can now manufacture IEDS and Chidiebere was probably manufacturing them in his sleep when DSS hooligans broke into his house and kidnapped him at about 2am on June 22nd, 2016. We want to tell the DSS that we know their objectives and every discerning mind knows them too.

The DSS is trying as much as possible to tag IPOB a violent group. The questions we want to ask the DSS are: Do we cover our faces when we march on the streets around the world? We are registered at the UN, if we are a violent group won't the UN know? Kidnapping people in the middle of the night, denying them access to food and water, legal and medical help in the hope of getting IPOB members to testify against the leader of IPOB will not work. The fact that this bumbling and idiotic DSS even contemplated insinuating that Computer Village, mostly owned by Biafrans of Igbo extraction, is a target for such an attack exposes the idiocy of those that run Buhari's Secret Police. If Buhari and his Northern Killer Squads like, let them kidnap, kill, torture and threaten as many Biafrans as they like but one thing they can never succeed in doing is to weaken our resolve to leave the Satanic Lugardian contraption called Nigeria.

We are prepared for imprisonment, torture and death at the hands of the dictatorial and extremist regime of Buhari but in the end Biafra shall come. There is nothing the Arewa-dominated DSS and Igbo traitors like Ikedife, Enwo-Igariwey, Joe-Judas Igbokwe, Monday Ubani, Peter Obi, Willie Obiano, Rochas Okorocha and Okezie Ikpeazu with a few other Lagos/Abuja based political jobbers can do about it.

Muhammadu Buhari and his DSS can continue to use Ikedife and the likes of Enwo-Igariwe within Ohanaeze as sources of information on how to arrest Biafrans and tag IPOB a violent group. It is on record that no prominent Yoruba or Hausa-Fulani person has ever labelled IPOB violent but Ohaneze President (Enwo-Igariwey) and Dr. Dozie Ikedife in their slavish desire to please their Arewa masters have variously granted interviews where they explicitly implied that IPOB under the leadership of Nnamdi Kanu is violent. They have been doing their master's bidding out of envy, greed and jealousy because the steadfastness of IPOB leader Nnamdi Kanu has exposed the charade and sell-out that these men have become. Dr. Dozie Ikedife, working at the instructions of DSS, gave an interview to a Yoruba anti-Biafra newspaper where he shamefully called IPOB violent and a propagator of ethnic hatred.

This paved the way for DSS to come out yesterday to laughably label IPOB a terrorist group trying to bomb Biafran businesses in Ikeja-Lagos. The world must be placed on notice that should anything untoward happen in and around Ikeja area, the DSS should be held responsible.

Irrespective of the shenanigans of Buhari and his DSS and the subterfuge of the Igbo-slaves in the molds of Ikedife, Enwo-Igariwey and co, the nation of Biafra must be restored.

On Fri, Jul 1, 2016 at 4:56 PM, Emeka Umeagbalasi
< [email protected] > wrote:
DSS At It Again: Another Failed Criminal Stigmatization Of IPOB As A Terrorist Organization

(Aboukuta Nigeria, 1st July 2016)-The Department of State Security Services is it again and starkly economical with the truth over its latest claims that “it has arrested an IPOB member in connection with plans to carry out coordinated attacks against religious bodies/edifices; police check points and the Computer Village in Ikeja, Lagos State with Improvised Explosive Devices”. The DSS says “the known IPOB member was arrested while making logistics supplies for their nefarious plan”.

The DSS further claimed that there are plans by the IPOB to carry out terrorist attacks during the Sallah celebration across the country. In other words, the DSS is saying, just as it falsely claimed few months ago, that the IPOB “is a terrorist organization”; thereby comparing it with the Boko Haram terror group that is notorious in engaging in deadly bombing activities particularly during high profile religious activities such as Xmas and Sallah feasts. This is a criminal stigmatization too many.

The DSS statement, as usual, is unprofessional and inter-service unfriendly. For instance, the DSS was not created to tackle common street crimes like armed robbery, kidnapping or gun running. It is purely the duties of the Nigeria Police Force and its specialist agencies such as CID and SARS to handle such. Even if the DSS provides intelligence, leading to the apprehension of the suspects, the substantive post arrest processes including investigations and public updates on progress of same, statutorily reside with the Nigeria Police Force. To say the least, the DSS is dangerously over-stepping its statutory bounds and must be called to order.

Just as the Service goofed unpardonable in its 9th of April 2016 phantom claims of murdering of “Five Hausa-Fulani Citizens by IPOB in Abia State”, the DSS has in its latest statement, made further mockery of the country’s intelligence community regionally and internationally by unprofessionally muddling up issues and engaging in falsehood of unpardonable proportion. The DSS is obviously a major victim of Nigeria’s securitization and intelligence decadence.

However, our major concern here is another attempt at labelling the IPOB and its leadership as “a terrorist organization”. The DSS has failed again just as it failed before. Labelling and stigmatizing the IPOB as “a raging and ravaging terrorist organization” is totally annoying and reprehensible. The IPOB has been forced by all means by the Buhari administration through its army, DSS, police, etc to abandon its strong nonviolence avowal and methodology and where these attempts have failed, resort to all kinds of stigmatization to label it so has been made and is still being made.

Records at our disposal, following our in-depth investigation concerning the arrest of Engineer Chidiebere Onwudiwe since early hours of Wednesday, 22nd of June 2016, have again, rubbished the DSS latest claims of “arresting a known IPOB member for planned terrorist attacks on religious bodies/edifices and Ikeja Computer Village”. Engineer Chidiebere Onwudiwe, to put the records straight for all Nigerians and members of the international community”, including the lying DSS; is the National Coordinator of the IPOB and well known to local and international rights and media organizations as well as members of international diplomatic community. He is non violent and has never used or advocated violence till date.

Some months ago, instructed agents of the Buhari administration infiltrated the ranks of the IPOB locally and internationally and successfully planted “strawmen” or moles within the group, leading to internal division within its ranks. The government sponsored division was put on hold following the transfer of its leader (Nnamdi Kanu) from DSS underground detention to Kuje Prisons.

In the 30th of May 2016 violently aborted Igbo/Biafran Heroes Day anniversary, the ranks of the IPOB were again infiltrated by agents of the Federal Government with heavy inducement, leading to internal sabotage of the anniversary, with the “purchased” leaking vital information about the preparation of the peaceful rally to government, on account of which, as much as 140 unarmed and innocent citizens were massacred and numerous others deadly shot with live bullets fired by soldiers, navy and police from automatic weapons.

In the late evening of 21st of June 2016, Mr. Onwudiwe, who resides in Rumukurushi area of Port Harcourt, was trailed through a certain Sienna car he was driving home with by some secret operatives aided by some mole-IPOB members. He was trailed to the front of his residence where he parked and headed into his apartment. He was returning from the routine meeting of his group in Port Harcourt when he was sighted with a Sienna car and trailed. Before then, a complaint had been instigated against him at DSS, Port Harcourt, by some of his members, compromised by government agents; who alleged leadership crisis.

It was on account of such conspiracy that the DSS chaps later mobilized and stormed Engineer Chidiebere Onwudiwe’s house in the hours of the blue law or early morning of 22ndof June 2016; violently broke his door and swooped on him, leading to his arrest and detention in the DSS cell till date. It is therefore surprising and shocking as per how the above scenario is connected to the DSS concoction. How can the DSS claim that “he was arrested while making logistics supplies for their nefarious plan”? Does a citizen make logistics supplies in his or her sleep?

The DSS also childishly theorized Mr. Onwudiwe’s “mechanical and chemical” university training as a surely ticket of his potentials of “making and detonating bombs”. Planning to “attack religious bodies/edifices and Ikeja Computer Village”, is further concoction too many. That a citizen was unjustly arrested and unconstitutionally detained since 22nd of June 2016 and only for his arrest to be made public few days to the Sallah celebration, further exposes the Federal Government bent to give a dog a bad name so as to hang it at all costs.