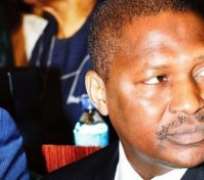 The Presidency has apologised to the Senate for the indiscretion of the Attorney General of the Federation and Minister of Justice, Abubakar Malami, who rebuffed Senate invitation, saying that the upper legislative chamber lacked the powers to summon him.

Senator Ita Enang, Special Adiver to the President on National Assembly, on Friday tendered an unreserved apology to the Senate over statements by a presidential aide, Okoi Obono- Oblo to the effect that the Senate lacked the powers to summon Attorney-General of the Federation (AGF) and Minister of Justice, Mr. Abubakar Malami.

Enang, during an interactive session with journalists in Abuja, said the AGF as an appointee of the President, was answerable to the Senate, just as he said that the statement ought not to have been made in the first place.

Enang also explained his enlistment as a prosecution witness in the prosecution of Senate President Bukola Saraki and his deputy, Senator Ike Ekweremadu.

According to him, his name appeared mainly on account of testimony he deposed to the police before his appointment as a presidential aide.

The testimony he further said was mainly because of his position as the chairman of the Senate Committee on Rules and Business in the preceding Senate.

Okoi Obono-Oblo, special assistant to the President on Public Prosecution, who appeared before the Senator David Umaru led Senate Committee on Judiciary, Human Rights, and Legal Matters had lampooned the Senate on Thursday, saying that the red chambers lacked the powers to summon the Minister of Justice over the ongoing prosecution of the two presiding officers of the Senate.

Addressing journalists Friday, Enang said that there was no way the Attorney General of the Federation will not respect senators because the lawmakers screened and cleared the ministers as ministerial nominees. Senator Enang, who said the AGF was currently indisposed promised that he would honour the invitation of the Senate when available.

He said, “I heard the statements after and I want to apologise to the Distinguished Senate, to the Committee on Judiciary and the distinguished senators because that statement ought not to have been made. And the Attorney General is Attorney General of the Federation, appointed by Mr. President, cleared by the Senate and responsible for the federation.

“We will handle this matter, but I first have to tender my unreserved apology for the impression it may have created to the distinguished Senate, Senators and the Committee members.”