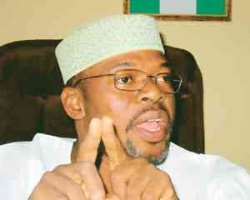 Governor Segun Oni
As the Ekiti State Election Petitions Tribunal delivers its judgment on the state governorship rerun election on Wednesday, there is tension among residents of the state, writes FEMI MAKINDE

In most parts of Ekiti State, there is tension as the people of the state await the verdict of the Justice Hamma Barka-led Election Petitions Tribunal on a petition filed by the Action Congress governorship candidate, Dr. Kayode Fayemi, who is challenging the victory of Governor Segun Oni at the state governorship rerun election held on April 25, 2009.

The state, which has witnessed increased violence in the last one year, is now tense following the clash that greeted the adoption of the final written addresses by all the parties to the petition.

The day nearly recorded casualties but for prompt response from the police. Armed thugs ambushed Fayemi, his supporters and some journalists on their way from the venue of the tribunal.

The AC governorship candidate, who was chauffeur-driven in his black sport utility vehicle, escaped a gunshot which he said was aimed at him. However, a journalist working for a Lagos State based media outfit, Channels Television, Mr. Felix Vincent, was nearly killed as his head was axed by an unknown thug. Some supporters of the AC, who were also coming from the tribunal, were also seriously wounded in the clash. Some of those injured in the fracas, who spoke with our correspondent on hospital beds, accused the PDP and Oni of masterminding the attack. But Oni, while exonerating himself and the PDP, said that Fayemi and his party hired the thugs who unleashed terror on innocent residents in the state. Fayemi, who had since petitioned the state Commissioner of Police, Mr. Chris Katso, National Security Adviser and the state Director of State Security Service alleged that his opponents in the state were looking for a way to silence him.

Fayemi's SOS to the police reads in part, 'I wish to inform further that there is a grand plan to attack me, my party leaders and members on the day the tribunal will sit for ruling on the Election Petition. There is equally a palpable fear among my supporters due to the boasts of these aforementioned PDP notorious thugs who had promised to maim them before and during the tribunal ruling.

'Currently, the state PDP leaders with their state government officials are holding nocturnal meetings to hatch a plot to unleash mayhem on my Isan Ekiti home. The PDP had once made a failed attempt on my Isan Ekiti home and succeeded in attacking our Oba's palace, and burnt down valuables including crowns and antiquities.

'I am aware of the various meetings going on in Oye Ekiti, Ifaki Ekiti, Ikere Ekiti and regrettably the Government House where there had been a decision to arrange for fake policemen who would arrest AC supporters at home and public places in Ado Ekiti and whisk them to unknown destinations.

'The office of a local government area Chairman ( name withheld) is daily hosting the leaders of cultists from University of Ado Ekiti , Esa Oke College of Technology, Federal Polytechnic Offa and Ambros Alli University , Ekpoma. This evil arrangement is apart from the retinue of cultists headed by one Marshal who is an unofficial Personal Assistant to the State Deputy Governor.

'My party and I have made several reports on the activities of these miscreants who among them are a personal assistant, who led a mayhem against me and several AC members who were wounded.'

Fayemi alleged that the PDP hired thugs were planning to attack him from April 17 to 19. On April 17, some persons suspected to be thugs were arrested by the police at the Catholic Church around Old Garage area of Ado-Ekiti. Fayemi and other AC members attended a service that was held in the church in honour of the immediate past Catholic Bishop of Ekiti Diocese, Rev. Olatunji Fagun, who was also celebrating his 75th birthday.

The suspects were taken to the police station and promptly released after interrogation. While the AC frowned at the release of the suspects who it claimed came to the church premises armed with the intention of killing Fayemi, the police said suspected persons were allowed to go because nothing incriminating was found on them.

Twenty-four hours after the incident, Fayemi said in an interview with journalists at his residence in Isan-Ekiti, ' God is my protector and I know they cannot kill me. Those who are thinking that taking my life will end the struggle should look for another strategy- it's a lie! They can't take my life but if it happens the struggles won't stop. The struggle is not just to be the governor but to liberate Ekiti State .

Security is the duty of the governor. It's not only security for me and my party members but for every resident of the state. It's not security against assassination, kidnapping and other crimes alone but security of basic needs of life like food and shelter for everybody.

'But the supposed chief security officer in the state undermines the security of the state. This is a big risk. His plan is to make us run out of this state but this can't happen because we were all born here. I was attacked at the entrance of the Governor's Office by the same set of thugs who unleashed terror on our people during the election.'

'Those arrested were some of those we had already petitioned the police about. It's only when there is a state-sponsored terrorism you see these kind of people walking freely in the society.

'Let me make it clear, Mr. Segun Oni is not my enemy. Although we belong to different political parties but he is my brother. However, we have now seen insertion of stray blood into Ekiti politics and we must end this.'

Our correspondent observed that security of lives and property now features prominently in prayer points raised by churches during services. Residents, who do not have the luxury of having police orderlies, have however, resorted to seeking divine protection from the impending violence.

While blaming the AC for exaggerating the violence in the state, Oni accused Fayemi of making attempt to recruit an agent of the United States of America's Federal Bureau of Intelligence to write fake reports on Ekiti State on the security implications of the likely outcome of the petition. The governor claimed that the intention of the fake security situation to be generated by his arch-rival was to create an impression that there would be chaos if the tribunal's verdict favoured him (Oni).

The statement reads in part, 'We wish to alert the Federal Government, the Nigeria public, government of the USA and the international community of the latest clandestine plot of the AC and its governorship candidate, Dr. Kayode Fayemi to hoodwink security agencies both in Nigeria, the USA and United Kingdom (UK) into believing that Ekiti State would be thrown into chaos should the Election Petitions Tribunal judgment go against Fayemi and the AC.

'An agent of the FBI has been recruited to carry out this dastardly assignment and he has already been mobilised to the tune of N15 million. He is expected to generate various negative security reports on Ekiti State in the next two weeks and feed the FBI with them. The security reports are also to be made available to the USA Central Intelligence Agency, the State Security Service (SSS), Directorate of Military Intelligence and the National Security Adviser in Nigeria .'

Just as Oni accused the AC of planning to foment trouble, his aides and the PDP chairman in the state, Chief Bola Olu-Ojo, are not left out.

The PDP chairman in a statement said there was the need for security agencies to act on different reports by notable groups on the growing spate of insecurity and attempts by the AC to foist violence in the state in the event that the judgment was not favourable to the party.

Olu-Ojo said, 'We are appealing to these desperate AC politicians to, in God's name; steer clear of plunging this state into violence. We have it on good authority that the AC is harbouring and feeding militants.

'Our findings also suggested that these people are mostly from the Badagry area of Lagos State. They (thugs) have warned all AC members to wear clothes that would distinguish them from others so that they will not be the casualties.

AC supporters have bought clothes that will be worn on the day of judgment. The clothes, a green and white coloured ankara fabric- contrary to the dummy they are selling to the public that it is for celebration, is to distinguish their members from others so as to know who to attack.'

But Olu-Ojo's counterpart in the AC, Chief Jide Awe, while reacting to the allegation asked the PDP to look for a new set of lies as an alibi for its failure at the tribunal which he said would soon be announced. Awe described the PDP allegation as an affront to common sense. According to him, the AC is not known for violence even in the face of provocations. He said that the party had a high regard for the judiciary and that was the reason it did not resort to self help even when 'our mandate was publicly stolen from us in 2007 and during the rerun election in 2009.'

Awe said, 'It is known to everybody in this country that the PDP tops the list when talking of assassination. The AC is not seeking to rule corpses but living beings so we don't need to hire thugs or militants. We are not terrorists. They, PDP and Oni, have enjoyed unmerited mandate for three years but before they leave they should find a way of paying the workers they are owing salaries.'

The Police Public Relation Officer in the state Mr. Mohammed Jimoh, assured our correspondent that the police were ready to ensure peace on Wednesday. He said a meeting had been held with the leadership of the two parties.