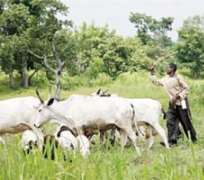 Governor Samuel Ortom of Benue State,warned that his administration will not surrender the state to the invading Fulani herdsmen, following unending attacks on Benue communities by herdsmen.

The Governor decried the activities of the herdsmen which is hindering farming in the state saying that the government would not give out its land to herdsmen for open grazing.

Ortom made the declarations in Makurdi, at the end of the Town Hall Meeting he held with stakeholders in the three senatorial zones of the state. He insisted that the government would continue to support those who were prepared to ranch their cattle in the state.

He said the decision of the state government to enact a law to prohibit open grazing of cattle was borne out of the commitment of his administration to end frequent invasion of the state by herdsmen.

Agriculture, according to him remains the biggest industry in the state, noting that available land in the state could not accommodate farming and cattle grazing at the same time.

He regretted the lives being lost in several Benue communities due to the activities of herdsmen, stressing that the administration was working round the clock to ensure that peace reigned across the state.

He was emphatic when he said, “I have made it clear that we will not surrender Benue to herdsmen. We are saying that we do not have land for grazing.

Though we are ready to support those that are prepared to ranch their cows but for those involved in open grazing should find other states because with the new law that would soon come into effect, that practice will not be acceptable in Benue State.”