ORONSAYE: ANOTHER EFCC WITNESS CONTRADICTS SELF 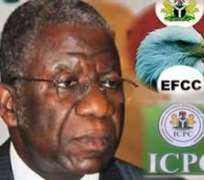 Destiny Ugorji
In a dramatic sequence, second prosecution witness of the Economic and Financial Crimes Commission-EFCC, Mustapha Sani Gadanya, in the on-going trial of Nigeria&rsquo;s former Head of Service, Mr. Stephen Oronsaye, Tuesday, followed the tread of the first witness, Ibrahim Rouqayya (Mrs), by contradicting himself while giving evidence before a Federal High Court sitting in Abuja, presided over by Justice Gabriel Kolawole.

Gadanya is a former &lsquo;second in command&rsquo; of EFCC&rsquo;s Pension Fraud Team and present Manager, Compliance Investigations in Standard Chartered Bank, Lagos. He was brought by the Commission as witness in the trial-within-trial, as ordered by the Court.

Led in evidence by prosecution Counsel, Mr. Afolabi, Gadanya explained his involvement in the investigation of the second defendant in the matter, arguing that he voluntarily gave his statement to the Commission.

However, during cross examination by the counsel to the second defendant, Mr. Oluwole Aladoyele, Gadanya contradicted himself, having earlier denied taking the statement of one Mrs. Phyna in 2011, only to admit when the defence Counsel provided documents to the contrary.

Defence counsel had asked the PW2: &ldquo;do you recall obtaining the statement of one Mrs. Phina Chidi in this case?&rdquo;

In his response, he quickly denied. &ldquo;I never obtained any such statement.&rdquo;

Insisting, defence Counsel stressed: &ldquo;on the 11th of February, 2011, you personally took Mrs. Phina Chidi to your superior officer to endorse her statement as having made same voluntarily. My lord, the statement on page 118 of the proof of evidence before this Court, could be used in testing the credibility of this witness. It has his endorsement as investigating officer. The same also is on page 176 of the proof of evidence.&rdquo;

Upon seeing the evidence of his involvement, the EFCC witness recanted and acknowledged that he signed the statement as investigating officer.

It would be recalled that Mrs. Phina Chidi was alleged to have been involved in moving huge sums of money from pension accounts using her under-aged children, but later turned to EFCC&rsquo;s star witness during the Pension fraud trial.

Gadanya also denied seizing the International Passport, mobile Telephone and other gadgets of the 2nd defendant, Osarenkhoe Afe, a claim that was contradicted by the third prosecution witness.

Also testifying in Court Tuesday, third prosecution witness, Nurudeen Sulaiman, an EFCC detective acknowledged that he was part of the team that executed a search warrant on the residence of the second accused person.

According to him, &ldquo;I knew the second accused, Osarenkhoe Afe, during the investigation of the pension fraud. We executed a search warrant in his house and we saw a Laptop, a brown envelope with documents of the office of the Head of Service, an I-Pad, a Zenith Bank Cheque book, letter head papers belonging to his company, Fredrick Hamilton Global Services Limited (3rd accused) and some other items.&rdquo;

The matter was tentatively adjourned to the 7th of July, 2016, with six more dates taken for continuation of hearing in the new legal year, before the Christmas break.

It would be recalled that the Economic and Financial Crimes Commission dragged Nigeria&rsquo;s former head of Service, Mr. Stephen Oronsaye and four others before Justice Gabriel Kolawole of a Federal High Court, Abuja over an amended 35-count charge bordering on alleged corruption.

Recall that many Nigerians have accused the EFCC of witch-hunting the former head of Service, Stephen Oronsaye over his Committee&rsquo;s recommendation for the merger of the EFCC with the Independent Corrupt practices Commission, ICPC, as well as his strong support for autonomy for the Nigerian Financial Intelligence Unit-NFIU.

Reports say the highest foreign donor support to the EFCC comes because of the NFIU.