The Role of Women In the Restoration Administration 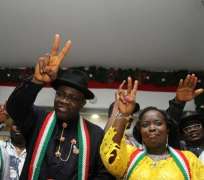 The vital role of women in the Restoration Administration of Bayelsa State Nigeria cannot be over emphasized. Unfortunately women generally do not often receive desired recognition owing to their subdued mode of activity vis-a-vis their male counterparts. It was once argued by Karl Marx that the said nature of women generally tends to encourage men to perpetuate their domination over them in all ramifications. Little wonder that conservative theorists argue that the actual role of women and in fact, female folks generally ends in the kitchen.

The Restoration Government making appreciable efforts to bridge the gap between men and women in politics. It is meet therefore to contextualize the achievements of women in the Restoration Administration through the Bayelsa State Ministry of Women Affairs, to wit: - Collaboration with SPDC to empower the physically challenged in the State. - Distribution of skill acquisition equipment to rehabilitation centres across the state.

Supporting the work of relevant non-governmental organizations (NGOs) and civil society organization (CSOs) working for the realization of women and children's rights, etc. - Distribution of loans to women in 2014 through the women development and empowerment scheme. These loans were given to traders, farmers, and those who wanted to start their own business.

Women all over the world share a common feature: they are marginalised in the sphere of public life. Yet, they have played a significant role in transforming the world, even against the backdrop that they are being under-represented. But the Restoration Administration led by His Excellency, Governor Seriake Dickson, has given the womenfolk ample political space and opportunities in the all-inclusive government. This drive to realize this cardinal objective prompted Governor Henry Seriake Dickson, to assert that 90% of women in Bayelsa State are bread-winners of their homes. Indeed they are indispensable in the development of not only the home but society as a whole.

It was this optimistic perception that underlie the appointment of so many women to positions of prominence either as politicians or as technocrats. Their conspicuous role at the commanding height of the Izon-Ibe Microfinance Bank, the Bayelsa Tourism Bureau, the Talent hunting industry and other strategic positions is an eloquent testimony to the primacy accorded women in the entire gamut of the Restoration Administration. This record has been unbeatable since Bayelsa State was created about 20 years ago.

Eleanor Roosevelt underscored the importance of women thus: "A woman is like a tea bag—you never know how strong she is until she gets in hot water.” Bayelsans saw that during the Governorship elections where so many women were engaged in mobilization, sensitization of the voters and interest aggregation in favour of the Restoration Administration. Thus it is can be asserted that the Restoration Administration has successfully resolved the age-long societal issue of political marginalization of women, through gender equality in politics and decision-making in Bayelsa State.

Indeed, the role women play in Bayelsa State in the present dispensation makes the difference between the Restoration Administration and other predecessor administrations. In Bayelsa State male chauvinism has been deleted from the lexicon of development.

Tonia is a member of the Bayelsa Social Media Team
27th June, 2016