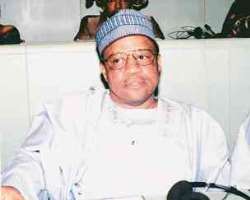 Ibrahim Babangida
The Methodist Bishops Council on Monday in Kaduna faulted the bid of a former military president, Gen. Ibrahim Babangida (rtd) to contest for the presidential election in 2011.

The bishops from across the country stated this after their three-day 28th council meeting in Kaduna.

The Methodist bishops described Babangida's foray into politics, especially his current attempt at having another shot at the nation's presidency as an insult to Nigerians.

The Prelate of the Methodist Church, Nigeria, Dr. Sunday Makinde, and the Conference Secretary, Rt. Rev. Raphael Opoko, in a communique issued at the end of council meeting, said that Babangida's action was tantamount to insulting the sensibility of Nigerians.

The bishops noted that Nigerians had not forgotten that Babangida annulled the freest and fairest presidential election on June 12, 1993, adding that the fallout of this infamous act led to the death of many Nigerians while millions of others were thrown into misery.

Reading the communique at a news conference, Makinde alleged that during Babangida's tenure, the country witnessed an unprecedented and monumental rise in the incidences of corruption.

The bishops also urged the Federal Government to ensure the proper reform of the nation's electoral process as well as a review of the voter register before the 2011 elections.

They added that the development would ensure that eligible Nigerians exercised their voting rights by actively participating in the electoral process.

The bishops said, 'On the forthcoming elections, Council calls on the Federal Government to carry out electoral reforms and review the voter register to enable every eligible voter to exercise his/her voting rights and participate in the electoral process.

They also called on the Federal Government to grant autonomy to Independent National Electoral Commission so that future elections would be well conducted.

The bishops said, 'The news of the declaration of Babangida that he would run for the presidency of the country at the forthcoming elections is an insult to the generality of Nigerians because Babaginda annulled the freest and fairest elections in Nigeria in 1993 which led to the death and misery of millions of Nigerians.

'Council noted that it was during his tenure that the level of corruption was raised to the level which has almost sunk the country.'

The 12-point communique of the bishops also asked the government to grant autonomy to the INEC so that future elections would be freely and fairly conducted.

The Methodist bishops also urged Acting President Goodluck Jonathan to remain consistent in the discharge of his duties while striving to consolidate the gains of his administration which they said included the de-listing of Nigeria from the list of terrorist countries.

They also condemned any form of religious intolerance still evident in parts of the country, especially in Jos, Plateau State and reminded governors of other states to remember that Nigeria is a multi-religious and secular country.

They said, 'While praying for the quick recovery of President Umaru Yar'Adua, Council calls on the Federal Government to make known to Nigerians the condition of health of the President and stop hiding the truth from the citizens.