We have restored peace in Ikorodu after militant attacks: Police 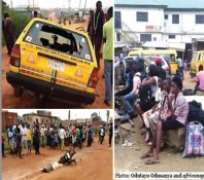 The crisis that engulfed some parts of Ikorodu area of Lagos State has been brought under control.

This was revealed by the police spokesperson in Lagos State, SP Dolapo Badmos.

Badmos told the News Agency of Nigeria on Friday in Lagos that more police operatives and soldiers had been drafted to the area to ensure that the crisis does not spread to other areas.

She said the command had also commenced investigation to ascertain the cause of the crisis.

The spokesperson, however, did not mention the number of people that were arrested or killed during the clash.

NAN reports that the crisis at Erekomuti/Itaoluwo areas of Ikorodu was started on Friday June 17 by two suspected pipeline vandal groups, which allegedly led to death of four persons.

The communities turned into theatre of war after reprisal attack was carried out during the week.

Unconfirmed sources told NAN that no less than 10 persons were killed between Thursday evening and Friday morning.

One of the residents said: “The place is a ghost town now; many residents have fled to Ikorodu metropolis or other parts of the state.

“The only solution is to have a police or army post in the area.

“The government should also intensify efforts to curtail the activities of pipeline vandals in the area.”

NAN.
Picture: Courtesy of The PUNCH