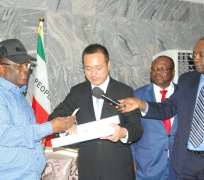 Governor David Umahi, while receiving a delegation from UNIDO and CAMCE at the Governor's Lodge in Abakaliki on Wednesday, said "On the issue of power, hospital, mining, agriculture, industry we are very much interested."

He specifically told the officials of the Chinese company led by the Director-General, Yu Tao, that his administration would be highly delighted if they could build a 10MW solar plant in the state.

"We will like if we can get like 5MW to 10MW solar plant to light up the streets in our towns. This is very important to us because we need to extend business hours and check crimes in the state," the governor said.

Umahi, who described Chinese investors as very reliable and dependable, thanked the United Nations Industral Development Organisation for being another strong development partner assisting the state in various sectors like Rice mills, ICT and provision of medical solar lamps.

Adding that the Chinese are very prudent in management, he assured all intending investors of safety and conducive environment.

His words, "We find it very fascinating working with the Chinese because they are very serious-minded people. They are not extravagant. When I gave some bridges to some Chinese to build for us, they brought certain kinds of equipment. So people started texting me, asking 'are these not multinational companies? Why is it that their equipment are not reflecting this?'

"I said to them 'wait for them to start work and see what they will produce. And so when they started, people, including some in government, began to wonder that a company that can do quality jobs like Julius Berger is in Ebonyi State."

Umahi, who had earlier noted the giant strides of his administration particularly in the provision of electricity and street lights across the state, described Ebonyians as very honest and hardworking people.

He however told the team which was led to the meeting by the UNIDO Country Representative, Dr. Chuma Ezedinma and the Managing DIrector of UrbanTech Engineering Ltd, Kingsley Agha, that they needed to quickly tidy up all arrangements to enable them start work on the power, agriculture, mining, manufacturing and health sectors.

He added, "Let me mark it that the only bad behaviour we have is that we are very much in a hurry. We have no patience at all when it comes to development. We dont want projects that will be on the table for six months before takeoff. We want to start moving as quickly as possible."

Earlier, Ezedinma who introduced the delegation, said he was pleased with Governor Umahi's efforts to develop the state. He mentioned the 5MW Rice Husk Power plant as one area the governor had consistently been on his neck to get started.

Also, Agha, who gave reasons for the visit, praised Engr. Umahi and Ezedinma for their desire to open up the South-East to the rest of the world. He asked Governor Umahi to visit the head office of CAMCE in China for a first hand information on the capacity and capability of the Chinese engineering giant.

Tao, after presenting a gift to the governor, had also explained that they were in Ebonyi to partner the state in the area of agriculture, mining, hospital and industry.

He described Ebonyi State as the best in the country in terms of securty, judging from its peaceful disposition and conducive environment for investors.

He lauded governor Umahi for taking the state to a greater height through his devopment initiatives.