Economic Crunch: What Okonjo-Iweala Would Have Done? 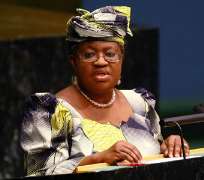 Nigeria is struggling in the face of a 40 percent slump in crude prices since the second half of last year, which has forced authorities to scale back budgeted spending and devalue the naira as foreign-currency reserves fell. It is no longer news that the government relies on oil for about 70 percent of its income. How better or worse can it get?

Were we forewarned to brace up for this challenge?
Like the Biblical Joseph who warned the Egyptian Pharaoh on the need to save from the seven years of abundance for the following years of famine. Had Pharaoh ignored the wise counsel of Joseph, the sufferings of the Egyptians during the period of famine would have been better imagined.

There is nothing dialectically new in the present economic hardship the country is facing that we were not warned of. Actions must come with corresponding consequences. Like Newton once postulated in his third law of Motion; that to every action there is an equal and opposite reaction. When we were warned, unlike the good Pharaoh, we ignored Joseph’s advice. Who then should we blame?

The truth is that there was the issue of falling oil priceswhen Dr. Ngozi Okonjo-Iweala held sway as the Coordinating Minister of the Nigerian economy. But how was she able to handle the economy in a professional manner? The difference has always been in the level of expertise and years of experience in economic management.

In the United States’ Federal Reserve Board, we can mention great persons like William M. Martin Jr. who served as chairman between 1951 to 1970, serving under five different political administrations, both Democrats and Republicans. Also we have Allan Greenspan who was appointed chairman in 1987 and served under four different Presidents, including Bill Clinton, even though he himself was a Republican. Do you still wonder why we are called a Third world country?

It is only in a country like this that we will replace a Harvard-trained former World Bank Managing Director, with a largely unknown person like Kemi Adeosun as finance minister just to prove a political point!

To demonstrate her professionalism and excellence, Okonjo-Iweala warned us all on the need to save for the rainy days. She told us that the days ahead are indeed tough and, like Dr. Tai Solarin’s famous prayer: “may your road be rough”.

Instead of saving, state Governors blackmailed, lampooned even politicized the whole matter asking if it was her private money she was saving. She said, “a strong policy, the fiscal consolidation path that we have and looking toward diversification of revenue resources,”. The powerful Nigerian Governors’ Forum (NGF) ably led by Rotimi Amaechi did not spare the poor woman. People like Raji Fashola went as far as the Supreme Court to force her to “share the money”. What could she have done in the light of these circumstances?

To make matters worse, no one was reasoning with her. The present leaders in the All Progressives Congress (APC) went on the international media in a well-coordinated propaganda effort inspired by the present Minister for information, Lai Muhammed, to blackmail the MIT-trained economist.

In the heat of the economic crunch, what should Okonjo-Iweala have done?

Therefore, we should direct our anger to the right channel and spare this great woman from further unnecessary condemnation.

Bade Adebolu is an Accountant based in Ado-Ekiti. He can be reached on [email protected]