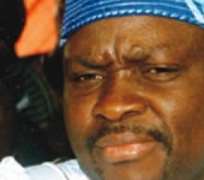 The personal bank account of the Governor of Ekiti State, Mr Ayodele Fayose and that of his associates have been frozen by the Economic and Financial Crimes Commission (EFCC).

Speaking in Ado-Ekiti, the governor claimed that he had gotten winds of plans by the Presidency to freeze his account some days earlier.

A source at the Bank told Governor Fayose that his account was allegedly frozen on the order of the anti-graft agency.

The Governor said, he had earlier issued a counter-cheque to make withdrawal and was rejected by the bank located at Onigari , GRA in Ado Ekiti, describing the action as criminal and illegal.

Citing Section 308 of the 1999 constitution, Fayose said he enjoys immunity as a sitting governor , urging the federal government to fight corruption within the ambit of the law.

Meanwhile, the EFCC, has fired back at Governor Ayo Fayose of Ekiti State over his claim that he cannot be investigated because of immunity currently covering him as a sitting governor.

Reacting, however, the commission said that the immunity being enjoyed by any governor did not prevent the agency from investigating suspicious movements of money into his accounts.

The Spokesman for the EFCC, Wilson Uwujaren told Vanguard that the anti-graft agency had the right to investigate any governor whose account was being used to move funds.

'Immunity does not prevent EFCC from investigating suspicious accounts of those enjoying immunity and Fayose cannot be an exception,' the commission said.