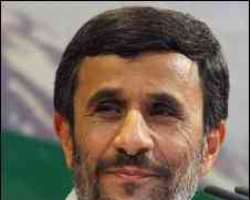 The conference reviewing the Nuclear Non-Proliferation Treaty, being held in New York for most of May, will have to overcome competing ambitions that might hinder it from taking decisive steps towards stopping the spread of nuclear weapons and moving to what President Barack Obama has called “a world without nuclear weapons”.

Among the competing aims are these:
The United States and its allies want much tougher inspections of all states signed up to the NPT and penalties for those (like North Korea in 2003) which leave it.

Non-aligned members are calling for a plan of action to implement the vision of worldwide nuclear disarmament laid out in the treaty, which was opened for signature in 1968.

Some Middle East countries are calling for action to set up a nuclear-weapons-free zone in the Middle East.

Iran's determination to continue enriching uranium against the orders of the UN Security Council is likely to dominate the opening session of the conference, with an appearance by President Mahmoud Ahmadinejad.

STRONGER INSPECTIONS
The United States feels that it has taken major steps over the first year or so of the Obama administration to enable it to call for stronger enforcement measures against states that break the rules of the world's nuclear watchdog agency, the International Atomic Energy Agency (IAEA).

These steps include the completion of a new strategic weapons treaty with Russia, a rebalancing of US nuclear policy towards a reduction in the potential use of nuclear weapons and their development, and a commitment to ask the US Senate to ratify the treaty banning nuclear tests.

In return, Washington wants movement to get all NPT members to agree on more intrusive inspection measures which would allow unannounced inspections. There would also be sanctions against states leaving the treaty to develop nuclear weapons.

Indeed the US is hinting that further disarmament could depend on stronger measures against proliferation.

Ambassador Susan Burk, President Obama's representative for nuclear non-proliferation, said recently: “Strong non-proliferation norms must be upheld to create the environment needed for the nuclear weapon states to make progress on disarmament consistent with our commitments under [the treaty].”

NUCLEAR DISARMAMENT
However, non-aligned nations prefer to concentrate on disarmament by nuclear-weapon states.

The non-aligned nations stress that the original bargain in the NPT – that the five states then with nuclear weapons would eventually negotiate them away in return for others not acquiring them at all – has not been fulfilled.

The problem here is that Article VI of the treaty is not clear-cut.

It states: “Each of the Parties to the Treaty undertakes to pursue negotiations in good faith on effective measures relating to cessation of the nuclear arms race at an early date and to nuclear disarmament, and on a treaty on general and complete disarmament.”

This sets out the vision but enables the nuclear-weapon states to refuse to disarm fully until everyone else does so – and that is simply not going to happen for the foreseeable future.

The non-aligned states have put forward a plan of action that envisages total nuclear disarmament sometime after 2025.

They say in their plan: “So long as the role of nuclear weapons in the context of security is not delegitimised and existing nuclear doctrines not abandoned, there will always be a threat of nuclear arms race and escalation of nuclear threat.”

MIDDLE EAST ZONE
There was a non-binding call for such a zone in 1995 at an earlier review conference (they are held every five years).

This zone is usually seen as a device to get Israel to give up its nuclear weapons (Israel is outside the NPT, along with India, Pakistan and North Korea and the universal acceptance of the treaty is another major problem).

A new factor is that the US seems interested in the concept right now as it could add to pressure on Iran.

However, a Middle East zone is expected to hit the hurdle – Israel will consider it only if and when there is a general peace agreement in the region.

IRAN
Iran remains a wild card and it is likely to be a card played with some drama.

President Ahmadinejad is down to speak on the first day and is sure to create a stir.

Iran says its intentions are peaceful but some fear it is positioning itself to be a nuclear-weapons-capable state.

Conference aims
This conference should not be regarded as a forum to solve the issues of Iran or Syria (which is suspected of building a plutonium producing reactor – bombed by the Israelis – without telling the IAEA) or North Korea.

Deepti Choubey, of the Carnegie Endowment for International Peace, says:

“This is not an opportunity to solve the concerns over Iran or North Korea's compliance with its non-proliferation obligations. But it is an opportunity for states that are party to the Non-Proliferation Treaty to create or strengthen new rules to deal with states that may be cheating from within the regime and then may choose to withdraw in the future.”