Alleged corruption: No one can extradite me from USA — Obanikoro 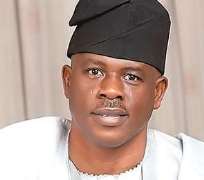 Nigeria's former Minister of State for Defence, Ambassador Musiliu Obanikoro, has said plans by the Nigerian government to extradite him from the United States of America will fail.

Obanikoro said this on Wednesday, following the search of his houses and confiscation of some of his properties by operatives of the Economic and Financial Crimes Commission (EFCC) on Tuesday.

In a series of tweets in the early hours of Wednesday, Obanikoro said since the EFCC did not have any document indicting him for any crime, it would be impossible to extradite him from a civilised system such as the United States of America.

He tweeted: 'Rumours of extradition are also lies - false allegations cannot stand up to any decent legal inquiry in a civilised system such as in the US.'

The former High Commissioner of Nigeria to Ghana said so far no invitation had been extended to him by the EFCC or allegation levelled against him, thus expressing surprise over the search of his houses in Lagos, by operatives of the commission.

He said the government was only hounding the opposition because of its failure to deliver on its promises to the masses.

He tweeted: 'If the harassment of the PDP members will help government to deliver good governance, many of us would submit ourselves willingly to Martyrdom.

'If hounding PDP members will solve Nigeria's economic woes, then we welcome it.

'This rather is a woeful attempt to distract from those woes.

'But unfortunately, harassing PDP leaders is not in any way equal to the delivery of good governance, no matter who applauds such illegality.

'The aim of government is to distract the people from their woes. Such tactics have been tried before in Nigeria and elsewhere, and they failed.'

The numerous tweets are reproduced below:
'Good morning friends and Good morning to all Nigerians. The following tweets are my reaction to recent developments. #MO

'The invasion and raid of my residence yesterday by agents of the state is a sad throwback to a tyrannical past that is better forgotten.

'In 16 years of democracy, we thought we had conquered despotism for good in Nigeria, but in one year, this government has brought it back.

'Let me reiterate clearly: I have never received any invitation from the EFCC over any issue up till date. This invasion therefore is premature.

'Furthermore, no court ordered a raid on my house or seizure of my belongings. Any such move is illegal and will be fought against legally.

'Such invasion and raid of my house without prior invitation from EFCC to me or any court order towards this signals a return to despotism.

'The illegal invasion and raid is a mockery of justice, an expression of disdain towards the judicial system and a terribly bad precedent.

'The illegal invasion without EFCC's invitation, notice of investigation or a court order is also a mockery of the intelligence of Nigerians.

'I put close to two decades into public service, in opposition and in government, all with an unblemished record and a clear conscience.

'To put one's family and dependents through such trauma of illegal invasion, in this holy month of Ramadan, is an unfair reward for service.

'The illegal Invasion of my house @realFFK and several others in detention: give meno confidence in government's willingness to do justice.

'EFCC has never officially  made public any investigation of my record in government at anytime before this illegal invasion of my house.

'Suggestions of an EFCC investigation have dwelt solely in the realm of rumours, over which I have sued several media organisations to court.

'The rumour before was that of a $2.7billion arms issue, now they say it is NSA imprest account - let them make the documents public.

'I cannot submit myself to such glaring witch-hunt, injustice and charade, but I'll fight it legally, with God and clear conscience on my side.

'Since EFCC opted to make this a media trial/circus, let them make public any document linking me or any of my children to any financial scam.

'The allegations are lies, not backed by fact or evidence, but a burning desire to obliterate the opposition and keep Nigerians distracted.

Rumours of extradition are also lies - false allegations cannot stand up to any decent legal inquiry in a civilised system such as in the US.

I welcome an extradition process, as it will expose the Shenanigans going on with their fraudulently fictitious fight against 'corruption.'

This is a Govt that promotes Ethnic Divisions, Distractions from Issues, Political Persecution and Official Gangsterism from High Places.

Pursuing Obanikoro, hounding Madueke, detaining FFK and Dasuki will not distract from the failure of Govt to deliver on ITS OWN PROMISES.

Nigerians must remain Steadfast in Condemning the Nepotism, Ethnic Division and Economic Illiteracy that has Characterised this Govt.

I remain Confident in my Ultimate Vindication and urge EFCC to make Public any Investigation so far conducted without any Invitation to me.

I also remain Unshaken in my Belief that Truth will Prevail over Falsehood as ever before, no matter how Exciting the Falsehood may Sound.

I commit Myself, My Family, My Allies and My Friends into the hands of the Almighty God to Whom ALL OF US will give account one day.