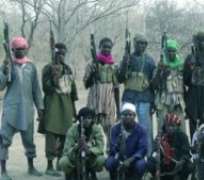 Boko Haram jihadists have sent a message to the Nigerian military  that  they are still a force to reckon with.

This followed their latest  attack on Kautuva  village near Chibok, where they killed at least four villagers and kidnapped three women.

The attack, which bore all their trademarks, was staged at dawn on Tuesday. Boko Haram fighters attacked the  village at dawn, set houses ablaze and fired on residents, according to villagers and a member of a vigilante group working with the army.

Chibok was where the group snatched more than 200 girls two years ago, residents and survivors said.

“Some of us were lucky to survive and ran to Chibok,” said a man who gave his name as Ali Pagu. Another resident said the jihadists had kidnapped three women.

Kautuva lies near Chibok, a town from where Boko Haram seized 276 girls from a school in April 2014, part of a seven-year-old insurgency to set up an Islamic state in the north. It has left some 15,000 people dead and more than 2 million displaced.

In May, authorities said a first of the missing Chibok girls had been found, and President Muhammadu Buhari vowed to rescue the rest of them.

Dozens of the girls escaped in the initial melee in 2014 but more than 200 remained missing. Parents accused former president Goodluck Jonathan, Nigeria's leader at the time of the kidnappings, of not doing enough to track down the girls and bring them home.

Boko Haram, which last year pledged loyalty to the radical group Islamic State, has kidnapped hundreds of men, women and children in their campaign to carve out an Islamist caliphate.

Under Buhari's command and aided by Nigeria's neighbours, the army has recaptured most territory once lost to Boko Haram, but the group still regularly stages suicide bombings.