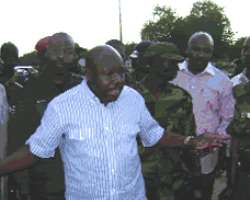 Gov. Ali Modu Sheriff
Governor Ali Modu Sheriff of Borno state is a man in a political quagmire of sort; a cul-de-sac if you like. By this time next year, he will be on the verge of becoming history as his eight years on the throne terminate. That should not pose a problem for him though many people in Borno state would like us to believe that the man coveted power so much that he will surely miss the trappings that come with it.

The biggest problem, which everyone in Borno State is very familiar with is the question of who succeeds Ali Modu Sheriff? The names that have been bandied about by political speculators have appeared to be what they are; mere speculation.

The governor himself has not helped matters. He has not only kept a curious silence about the identity of who the cap fits, but has openly demonstrated a disliking for any kite flying or speculation by hierarchical elements in the party or even by ordinary hapless bystanders. In fact, he was said to have, at several stakeholder meetings shown open hatred for any discussion that attempts to zero in on the possible successor.

Although the governor's mental and body mannerisms have not shown preference for any of those believed to be in the reckoning, some analysts have upped the ante by making reference to some key elements known to enjoy the governor's look-in. But the more people tried to put stakes on these elements, the more it suddenly becomes something of a wild goose chase. The present commissioner of Agriculture Kashim Shettima tends to be pointed at more frequently as the anointed one; but others too, like the current commissioner of commerce Muhammed Imam, his counterpart in Finance, Abdulrahman Terab and the late commissioner of Health Zubairu Maina among others are suspected to be front runners too.

Why is it becoming difficult to be accurate on who exactly is the preferred man? Is the governor at sea as to who he wants? Is there an element of family pressure on him to anoint a sibling? Is this perceived family pressure prompted by ulterior motives? Is the governor jittery about anointing a candidate who may turn around to persecute him as is regrettably the case with many predecessor-governors around the country? Is the governor scared of possible betrayal?

While these postulations the rumour mill in the state appeared to have done a 360 degrees summersault with eyes gradually shifting the direction of the governor's brother Mala Modu Sheriff. An introvert to the core and a loner by nature, Mala Sheriff was a commissioner of Finance in the government of the late Mala Kachalla between 1999 and 2003.

Not even this stint in the corridors of power was able to break Mala's introverted nature as he succeeded in keeping mostly to himself but, in fairness to him doing his work quietly, effectively and diligently to the satisfaction of his boss and mentor. Educated, urbane, enterprising, independent-minded and a go-getter, Mala Sheriff is your typical apolitical person who naturally harbours some contempt for the dirty way we play politics in this country but who regardless, still yearns to dominate his environment.

Some people see him as arrogant and unapproachable while others prefer to see him as too westernised due primarily to his penchant to mind his business. On the whole however, even his most trenchant critics do admit that he has always been effective, committed, enterprising and dogged in all the tasks he has handled either as a businessman or as a political appointee.

I am aware that there is a groundswell of opposition to the idea that Mala Sheriff's name may be mooted by his brother governor. I am also in the know that those who have an axe to grind with him do so due to the fear that endorsing Mala will be like making governance in the state a family affair. Other than this, most of the opponents of this idea lacked any substantial, realistic, justifiable and proven reason for their opposition.

To begin with, Mala Sheriff is acknowledged by almost everyone I have spoken to to be qualified, suitable, capable and competent for the job. The fact that he is a member of the Galadima Sheriff family cannot be used to deny him his constitutionally guaranteed rights to aspire for any political office of his choice either in the state or in the country. Doing so will amount to grave injustice which in itself is undemocratic. An injustice in whatever form is not only unacceptable and unknown to law but also inimical to the growth of democracy.

So long as the prompting of Mala's candidature is not at the behest of either the governor or any member of his family or that doing so will provide cover for any illegality I and several others whose opinions I have sounded out have no quarrel with it. The most important thing is for a level playing ground to be created for all aspirants to take a shot at it and guarantee the emergence of the most popular and acceptable candidate.

Whoever emerges takes the ticket and if it is Mala, then it behoves on all party members to work for the success of the ticket. Those who know him say he is very unlikely to be manipulated or railroaded into doing any bidding that will be injurious to the state. At this critical juncture of the development of the state, a man with the strength of character, an unbending pedigree, uncompromising stance and serious mindedness of Mala Sheriff will just fit the bill; in my view.