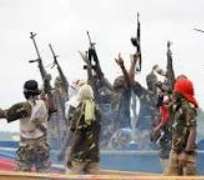 An emerging militant group in the Niger Delta, Niger Delta Vision, has

and crude oil in the nation's territory ninety six hours.

Spokesman of the group locomotive Osia who gave the warning in a statement,

allocate oil fields to indigenes of the Niger Delta area.

Osia lamented that since the exploration of oil in Nigeria sixty years ago, Niger

holding sway in the oil business.
He said his group, the Niger Delta Vision, has decided to strike at the expiration

of the deadline unless the federal government immediately revokes all oil

licences and allow the people of the area to be owners of their natural resources.

While commending the Niger Delta Avengers, the Red Egbesu, the Isoko

efforts and sacrifices, the group assured of ensuring that the ﬁght for the soul of

the oil producing communities, would be un-abated .

government over the years, must now come to an end as God who gave us the

political leaders, the group declared.
Meanwhile, the Niger Delta Vision has strongly condemned an elder of the

known as Tompolo not to use the name of Niger Delta for his personal gains".