6th Ordinary Summit of ICGLR Heads of State and Government to take place in Luanda, Angola on 14th June, 2016 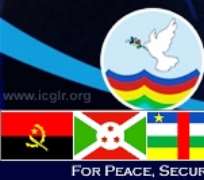 Luanda, Angola 10th June, 2016: At the invitation of His Excellency José Eduardo dos

Santos, President of the Republic of Angola and ICGLR Chairman, the 6th Ordinary

Summit of ICGLR Heads of State and Government will take place in Luanda, Angola on

14th June, 2016.
The Summit themed “Accelerating the effective implementation of the Pact and its

the meeting of ICGLR Chiefs of Defence Forces on 10th June, 2016 followed by meeting of

12th June, 2016.
Among others, the Ministers of Defence will consider the report of the meeting of Chiefs of

Mechanism (EJVM); Report of the Military Experts Committee which conducted a military’s

needs Assessment in the Central African Republic (CAR) on 10th to 15th March, 2016 and

the report from the Guarantors comprising the United Nations (UN), the African Union

(AU), the International Conference on the Great Lakes Region (ICGLR), and the Southern

African Development Community (SADC) on the implementation of the Peace, Security

and Cooperation (PSC) Framework for the DRC and the Region. The Ministers will also

Republic of Sudan.
On the other hand the Ministers of Foreign Affairs will adopt the report of the Regional

Angola; receive a presentation on the Report of Ministers of Justice and the updates on

the implementation of the Regional Initiative on Natural Resources (RINR). The Ministers

Secretary General to the Great Lakes Region on the Peace, Security and Cooperation

2016. The Ministers will consider and recommend to the Summit the candidates for the

position of ICGLR Executive Secretary following the end of tenure of the incumbent.

The last Ordinary Summit was held on 15th January, 2014 in Luanda, Angola.