Blasphemy: Five arraigned over killing of Christian woman in Kano 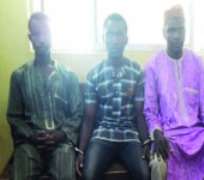 The principal suspect in the murder of Mrs Bridget Agbahime at Kofar Wambai market on June 2, 2016, Ahmed Dauda, alongside four other accomplices was on Friday arraigned at a Kano Magistrate Court.

Among the accused persons arraigned in court are; Ahmed Dauda (Principal suspect), Abdullahi Mustapha; Zubairu Abubakar; Abdullahi Abubakar and Musa Abdulllahi, all of whom pleaded not guilty when the four-count charge was read before them.

Four other accused persons were not present in court, as they were still at large, according to the prosecution witness.

After taking their not-guilty plea, Chief Magistrate Mohammed Jibrin adjourned hearing till June 28,2016, while the accused persons were remanded in prison custody, pending the hearing date.

Reading the charges against them, the court clerk said, among others that “you, Ahmed Dauda on Thursday, June 2, 2016, burst into the shop of the late Mrs Bridget Agbahime, alongside other accomplices, brutalised and held her hands and shouted: '' Allahu Akbar (God is great),accusing her of blaspheming Prophet Mohammed.”

Also, the court was told that the shout of Allahu Akbar attracted his other accomplices, all of whom accosted the late Mrs Bridget Agbahime in her shop, brutalising her in the process, which led to her subsequent death.

At the mention of the case on Friday, only the first and third accused persons have counsel, namely; Nazifi Yusuf and A.A Sadiq respectively.