Imagine What Happened at The Murtala Muhammed International Airport 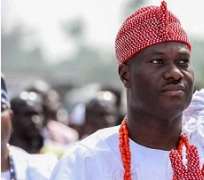 Our beloveth Ooni of Ife, Oba Adeyeye Enitan Ogunwusi Ojaja II and his queen Olori Wuraola Ogunwusi, caused a great scene at the Murtala Muhammed International Airport on their way to USA.

The Ooni this time is not going for a visit but for an event to unite Africans especially the Yorubas in the North American country.

Oba Adeyeye of recent has been under serious fire from well meaning Nigerians about his constant ways of leaving his thrown to go visiting people of various standards and to them, they feel it is not right for his status.

Though not many might want to agree with such thoughts but he could be best described as the 'modern day king.' The Ooni pulled a massive crowd at the departure wing of the airport -as people gathered to catch a glimpse of him.