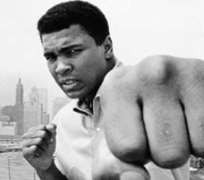 Muhammad Ali—the three-time heavyweight-boxing champion, the incredible humanitarian, the inspiration for the activism of athletes all over the nation—passed away on Friday, June 3, and the world is in mourning.

Condolences came in from not just sports personalities but world leaders. With the fear of not sounding like the proverbial broken record...George Foreman said, ...I am good, I was very good, but he was better."

The testimonies came from everywhere and interestingly at every point efforts were made to highlight that he was human, nine kids from four women. He never ran from his challenges, whether it was against opponents like Liston, Fraizer or Foreman. Whether it was against the United States or whether the battle was Parkinson, he soldiered on.

Many moments define the man, so many people have said, but I will rather say the moments did not define the man, he define moments, in pain lighting the Olympic flame in Atlanta '96 or those witty moments of the butterfly, and the bee. He sure came, saw and conquered.

Well as the entire world bids this man goodbye, I am reflecting, who are Nigeria's great men, and I dare add do we have men that can lay claim to being the greatest in the project called Nigeria.

We had a Zik, but the Igbos rather laid claim, and though many acknowledge him as Zik of Africa, what memories are left of him. We produced Awolowo, but the Yorubas insist, he's our man, he gave us education, gave us many-thing-one-thing. And truth is, how great was the man who begged Nigerians just for one day, to be their President.

We have seen the coming and going of the Sarduana...Ahmadu Bello, if only the North could produce a modern day Ahmadu Bello, or even a Tafawa Balewa, maybe we may not be talking Boko Haram or the abject poverty and illiteracy plaguing the region.

In sports whether it is the Dream Team of Atlanta '96 or it is the Tunisia Super Eagles, Okocha, or Kanu Nwankwo, Yekini or Celestine Babayaro. They all are great sports persons, and trust me I did not forget Sunday Bada, Chidi Imoh, Innocent Egbunike, Mary Onyali or Chioma Ajunwa. They all are great in their respects and world but how great were they.

In politics, whether it was the great Barkinzo of the Coke and Fanta, or Adedibu of the penkelemess or the greatest Sharia law advocate Yerima of Zamfara, we have had them, we have see the likes of Jazz playing fine boy donald duke or smooth operator Odili, and the late Governor General Alams...Great governors they were.

How could we talk greatness and forget Abacha, IBB or the greatest Obasanjo, the Lucky man Jonathan was equally great, and currently we are blessed with Sai Baba...a great greatest man.

We have seen the likes of Ngozi Iweala, she nearly was World Bank President, who remembers Rilwan Lukman, or how about Abiola…Money, Kudi, Owo. Now we have Dangote and his likes.

Nigeria has produced them…several Muhammad Alis in their own rights. In looting their own nation, and people we have some of the greatest looters.

Yet, in 2016 we still remain as backwards as when the word itself is spelt swardback. We kill for our own ‘gods’, we have the worst medicare, and our educational institutions are comatose, sports facilities non-existence. We beg for what we have or own in abundance.

And in this quasi tribute in which I have looked Ali as my own Nigeria I end with one of his few last words.

I am a Muslim and there is nothing Islamic about killing innocent people in Paris, San Bernardino, or anywhere else in the world. True Muslims know that the ruthless violence of so-called Islamic jihadists goes against the very tenets of our religion.

We as Muslims have to stand up to those who use Islam to advance their own personal agenda. They have alienated many from learning about Islam. True Muslims know or should know that it goes against our religion to try and force Islam on anybody.

Speaking as someone who has never been accused of political correctness, I believe that our political leaders should use their position to bring understanding about the religion of Islam and clarify that these misguided murderers have perverted people’s views on what Islam really is.

Our leaders are the greatest in the art of lies, taking bald men to barbers shop, promising bridges where there are no rivers or water. Giving out umbrellas when it’s not raining only to ask for it when it rains silly. Our leaders have continued to divide us across ethnic and religious lines, as it suits them, and we continue to heap on them the accolades of greatest when infact we remain on the same pathetic pedestal of same difference, for how long—Only time would tell