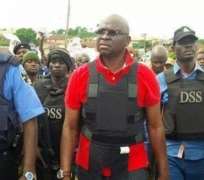 Governor Ayodele Fayose of Ekiti State, has condemned Monday's killing of over 30 Igbo protesters, who were mainly members of the Indigenous People of Biafra (IPOB) and Movement for the Actualisation of Sovereign State of Biafra (MASSOB), saying it appeared that President Muhammadu Buhari was turning the people of the South-East and South-South to 'politically endangered species.'

He called on the international community to take note of the wanton killings being perpetrated by the Buhari-led All Progressives Congress (APC) government.

A statement on Wednesday, by his Special Assistant on Public Communications and New Media, Lere Olayinka, Governor Fayose said there was no justification whatsoever for the killing of over 30 Igbo youths just because they were marking 'Biafra Day in memory of the former leader of the defunct Biafra Republic, the late Chukwuemeka Odumegwu Ojukwu.'

He said it was worrisome that Nigeria and its people had been more divided since the advent of Buhari's government, adding that approach to civil unrests of any kind under the government was causing more security problems in the country.

The governor, who reiterated his avowed belief in the unity of Nigeria, said it was unspeakable for security men to have used life ammunitions against the Igbo protesters and went on to justify the murder of innocent Nigerians just because their views were different from those of the President.

government is to say the least, wicked and animalistic,' the governor said.

government from August 30, 2015 till date, adding that 'It appears that President Buhari has made up his mind to eliminate as many South East and South South people as possible and lovers of the corporate existence of Nigeria and its people should call the president to order.'

killing of innocent Nigerians, security agents could demonstrate their heartlessness by coming up with justifications for the criminal act.

'One is however not surprised because every evil perpetrated by the Buhari-led government against Nigerians, especially those the

presidents appears to hate have been justified by those who perpetrated them.

'We were in this country when over 1,000 Shiite Muslims were killed and buried overnight in Zaria, Kaduna State and the murder was

justified. We were also here when over 400 Agatus were killed in Benue State and the President said nothing.

'The Monday killing of over 30 Igbo youths is therefore condemnable. Its justification is barbaric, heartless, crude and must be condemned by all lovers of unity of Nigeria and its people.

agitation for a Nigeria in which all Nigerians are treated equally irrespective of their tribe and religion.'

Meanwhile, the Deputy Senate President, Senator Ike Ekweremadu, has advised the government to tread cautiously in handling protests by the Indigenous People of Biafra (IPOB) in order to avoid unnecessary loss of life.

Ekweremadu gave the caution while briefing the Senate on the reported military invasion of some parts of the South-East in the early hours of Monday and the attendant casualties on the innocent citizens.

He said it was not proper that security agencies should brutally attack civilians who were making peaceful protest within the specifications of the law.

Speaking after he raised Order 43 of the Senate Standing Orders 2015 (as amended), he said that the country had witnessed a lot of unnecessary killings arising from people's clashes with security agencies.

He urged the Senate to condemn killings by security agencies, particularly the ones involving the youths, which he said were the hope of the country in future.

According to him, the protest by members of the 'Movement for the Actualisation of the Sovereign State of Biafra (MASSOB), which led to a bloody clash in Delta and Anambra states could have been handled differently.

Ekweremadu who expressed worries on the development in the South-east said since Nigeria was a democratic nation, its citizens should be allowed to speak out on issues bothering them under responsible circumstances.

He charged the security agencies to also demonstrate sense of responsibility while handling such circumstances, to avoid losing innocent lives unnecessarily.

He said, 'I will like to use this opportunity under Order 43 to say that the security agencies must apply caution in trying to quell disturbances. We have had so much of blood bath in this country under different circumstances and we cannot continue to lose young men and women because the future of this country belongs to them.

'It is important that this Senate rise to condemn any act of killing in any part of this country, especially with the one that concerns the major part of our future which remains the youth.

'We are now in a democracy and people should be entitled to speak their mind to assemble under responsible circumstances. Security agencies must also be responsible in dealing with those circumstances to ensure that lives are not lost unnecessarily.

'I just wish to bring to the notice of the Senate for us to take note and possibly the states involved to set up enquiry to find out what led to these clashes and the number of killed and to ensure that this doesn't happen in future'.

However, the motion was not subjected to debate, in line with the parliamentary tradition of the Chamber on such motion.

The Senate President, Senator Bukola Saraki, in his response, said that although there could not be any debate on the matter, it was necessary that the matter was brought to the knowledge of the Chamber.

He said, 'The Deputy Senate President brought this to my attention in line with our rules on Order 43 on this unfortunate incident that has happened and as regards our rules, there cannot be any debate on it.

'But I think that the point he has raised must all draw attention and see what necessary action will be taken in order to address this matter'. - Additional report from Daily Times.