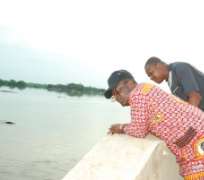 Farmlands in  five  communities in Ivo Local Government Area of Ebonyi State have  been submerged by flood.

The flood was caused by the blockade of a dam being constructed by the Federal Government in Npu,Anuri LGA  of Enugu state.

Governor  David Umahi,who raced to the site of the dam  on learning of the development on Monday, ordered   a comprehensive report of farms and cash crops destroyed by the flood.

Noting that the damage was huge, Umahi said the report would be sent  the  Federal government  with a view to assisting the state and farmers whose means of livelihood had been severely affected.

He said, ”  We came to the point of  the Ukeh River  Dam that is being constructed by the Federal Government in Npu,Anuri LGA of Enugu State.

“A comprehensive report will  be carried out so that we can seek Federal Government’s assistance not only to the state but to the farmers whose agricultural produce have been seriously  damaged.”

The  Caretaker Committee Chairman of Ivo LGA ,Chief O. Ude,who accompanied  Governor Umahi to the site of the  dam  said the blockade  caused   water to overflow backwards, thereby   destroying  the farmlands in  the affected communities.

“If you look back from where we are standing, you  will  see a river coming down from there,that is Ivo,and this river is Ukeh.So the rivers meet here and  it is from here that  the contructors created an embarkment that makes water to flow backwards.”

The chairman of Ngwogwo Community Development Union, Mr. Johnson Ukpai, lamented that the fllod had destroyed  agricultural produce like yams,cassava, rice,Maize and  cocoyam.

He pleaded  with the Federal government to come to their rescue.

Youths of the area were seen displaying cassava tubbers which had decayed due to the impact of the flood.

Barr. Augustine Ossai, a liaison officer in Ivo legislative  council, also lamented the damages done by the flood and called on the Federal Government and the National Emergency Management Agency to immediately come to the assistance of farmers in the area.