5 Facts About Kcee That Will Wow You 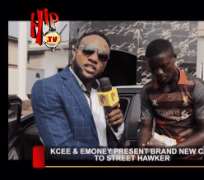 Do you know Kcee has sold airtime in traffic?

He, for a TV show, hawked airtime amongst other things in traffic.

The fan, Promise, who is just a shoe hawker was more than elated!

Who wouldn't be?
3. Kcee shocked a couple at their wedding with a surprise performance

Kenechukwu Gloria and Chidiebere Livinus got the surprise of their lives when Kcee appeared at their wedding ceremony bearing gifts. He not only performed but gifted them two android phones.

Imagine having a big star perform at your wedding just because you're a huge fan!

4. Kcee has an all red Mercedes G5S AMG and a full gold Cadillac Escalade.

Both cars are said to cost over N28million and N21million respectively.

5. Finally, Kcee will be, with his hit songs and peculiar dance moves, making an appearance in Umuahia with Legend on the 5th of June, 2016.

What could be better than having Kcee headline the Real Deal Experience twice?