No one Invited by EFCC can come out clean: Magu 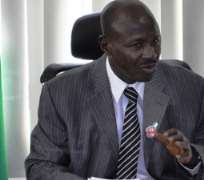 The Chairman of the Economic and Financial Crimes Commission (EFCC), Ibrahim Magu, on Thursday blew a shocker to would-be invitees to the anti corruption agency saying there is no one who would “come out clean” after honouring the invitation of the anti-graft agency.

Magu made the assertions while speaking on Question Time, a programme on Channels Television, insisting that the commission carries out thorough findings before inviting suspects.

He denied the allegation that the EFCC had turned into a tool for political witch-hunt, saying the commission is only after “thieves.”

“That's why anybody who is invited here will not come out clean, because we do our homework before we invite you. We may investigate for a year or six months and the person would not know,” he said.

Magu, according to The Cable, said the agency does not select those it prosecutes, adding that once there is any evidence against suspects, the EFCC goes after them.

“There is no sacred cow, we will go after anybody who has stolen the resources of the people. We have no reservations.

“We fight corruption both within and outside. We don't go after innocent people for political reasons, we are going after the thieves of state resources,” Magu added.

He described London as the “headquarters of money laundering,” alleging that Britain's capital had created a haven for stolen money.

“London is the capital of money laundering; it is where all the stolen money is hidden. It has given a haven to all the corrupt persons and stolen money from all states of the world.

“In fact, it is the headquarters of money laundering. Most of the stolen money are hidden either by properties or in banks or as physical cash,” he stated.

While launching the pet project of the agency 'Clean Hands' Campaign in Abuja on Thursday, Magu said the reinvigorated anti-corruption drive had yielded tremendous results as it had secured the convictions of 140 suspects within six months.

He charged Nigerians to imbibe the culture of ' living with clean hands' as a way of stamping out corruption from the society.

In his brief, he stated that the job of the EFCC entails confronting looters of the nation's commonwealth, taking on impunity and restoring hope to the hopeless, adding that the Commission had been reshaping the face of law enforcement in Nigeria in the past 13 years.

In his speech on the theme: ''We Must Win The War on Corruption and Impunity, the anti-graft chairman stated that the commission had kept faith with its mandate and the expectations of Nigerians with several convictions.

“In just six months of this year, we have secured over 140 convictions, including some elusive 'high profile' criminals. We have recovered billions of dollars of stolen funds and blocked numerous avenues of money laundering,'' he said.