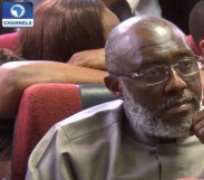 The immediate past National Publicity Secretary of the Peoples Democratic Party, Chief Olisa Metuh, has agreed to refund the N400m he allegedly collected from the office of the former National Security Adviser, Lt.Col. Sabo Dasuki (retd).

By this development, the former PDP spokesman may have tacitly agreed to his wrongdoing in collecting N400m from the office of the National Security Adviser, for which he is currently charged  by the Economic and Financial Crimes Commission.

Metuh is currently facing charges   by the EFCC for allegedly receiving the money, which the prosecution alleged was collected from the $2.1bn arms funds allegedly diverted by the former NSA's office to other purposes aside from buying arms to fight insurgency.

The money was said to have been released to him to launder the alleged bad image of former President Goodluck Jonathan ahead of the 2015 presidential election, which Jonathan eventually lost.

Many top PDP officials are facing similar charges or partaking in the sharing of huge amounts of money shelled out by key officials of the immediate past administration ostensibly to rail-road Jonathan back to office.

In a press statement  by Gilbert Metuh, on behalf of the Metuh family, said his Olisa Metuh's life was in danger because of the alleged N400m.

According to the statement, the former PDP spokesman is suffering from spinal cord injury and is prepared to refund the said money so that the court could free him to enable him seek medical attention abroad.

Chief Metuh had sought for court permission to travel abroad for surgical operation but was turned down on Wednesday.

In a judgment by Justice Okon Abang of a Federal High Court, Abuja, where Metuh is facing trial on the alleged collection of the N400, in refusing Metuh's application said: “This is not a case of sympathy, but a case of law.‎ This court has no jurisdiction to entertain this application,”

“The court is not Father Christmas to give to the defendant what it did not ask for.

“The application lacks merit. It is accordingly dismissed. The court cannot set aside its decision.”

The judge  said because there was a subsisting order directing Metuh to deposit his international passport with the chief registrar of the High Court as part of his bail conditions, his hands were tied to grant the request.

He added that Metuh through his counsel did not apply to vary the bail conditions.

Chief Gilbert Metuh said the family was aware that the matter regarding the former PDP spokesman was sub-judice, stating that the family was only reacting to issues that were in the public domain.

Gilbert said, “Since his (Metuh's) arrest and even up to about a week ago, our son has made several overtures to the arresting authorities for him to return the money since they now claim in court that it came from government coffers. All efforts have been unsuccessful.

“It is instructive that out of over 300 names listed as having received money from the ONSA, all those who offered to refund money were not arraigned in court.”

Gilbert said his accused brother was diagnosed with a spinal cord problem in 2004, alleging that due to his detention, the situation worsened.

“In the course of his trial, the situation deteriorated, especially after he fell at a meeting in the party office,” he added.

He added that the family was shocked that with all the information available to the court regarding Metuh's grave medical condition and the critical need for him to have this corrective surgery, the Federal High Court Abuja refused his application.

Gilbert added, “Our request is on the basis of a life-threatening ailment and we will be undertaking with our own private resources.

“He currently relies on palliatives being given to him at the National Hospital Abuja waiting for the opportunity of a corrective surgery.”