I'M STILL NO.1 IN NIGERIA 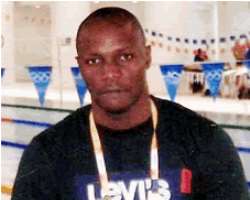 Corporal Yeiyah
Corporal Yellow Yeiyah of the Nigeria Police, who represented Ogun State at the last Chief of Naval Staff Open Swimming Championship in Kaduna, has declared that despite the fact that he came second on the medals' table, he still remains the number one swimmer in the country.

Yeiyah won five gold medals for Ogun State at the event, thereby helping the state to claim the third spot at the competition. Meanwhile, Ogun State's medal haul at the Kaduna outing stood at six gold, six silver and six bronze, bringing all to 18 medals.

Corporal Yeiyah said his claim to the number one spot in swimming was based on the fact that he participated at the Beijing 2008 Olympic Games, stressing that he remains the only Nigerian swimmer to have made it to that level. He said that despite the fact that he did not win any medal at the Olympics, being in Beijing at the last Games was a rare privilege he would always live to cherish.

'I was the only swimmer that represented the country in Beijing. It was a rare privilege I would ever remain grateful to God for. Though I did not win any medal at the Olympics, representing Nigeria there was great.'

Yeiyah stated that swimming is a nice sport; that it relaxes the muscles and the entire body system. He expressed his gratitude to the Chief of Naval Staff and the president and board members of the Nigeria Swimming Federation (NSF) for resuscitating the Chief of Naval Staff Swimming Championship, adding that swimmers in the country have not had it so good in recent time and prayed to God to grant the board the strength to continue in organising competitions for swimmers in the country.

'Swimming is very nice; it is one sport that helps to burn ones energy. After a swimming context, all your muscles and body will relax and you will become sober.

'There is discipline in swimming. During a competition, any faulty starter is disqualified.

'We have a lot of upcoming swimmers in Nigeria, but lack of competition had kept them in the dark. Now that the Babatunde Fatai Williams and his board had decided to revive the sport in the country with the various championships they have lined up, I believe that the sport will definitely grow in the country.

'Swimmers in the country are very happy today for the new development. Even if there were no financial reward attached to this competition (in Kaduna), we would still have gladly participated in it because we have been yearning for competitions like this.

'We pray they call us to camp early enough to enable us prepare for the African Swimming Championship, which Nigeria will be hosting in Akure, Ondo State. After that, there is another Championship in Kenya later in the year. We have many competitions lined up for us, and I must confess, we have never had it so good.

'The current board of the NSF is the best I have ever seen and worked with since I started swimming in the country in 2000,' Corporal Yeiyah enthused.