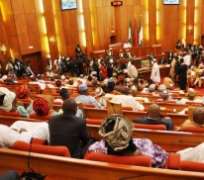 Nigerian lawmakers have summoned the finance minister and central bank (CBN) governor to brief them on new proposals to ease the country’s economic crisis.

It comes after the CBN announced plans to introduce “greater flexibility” into the foreign exchange market, a move which would allow the naira to devalue.

The economy shrank in the first quarter of 2016, with the oil-producing nation hit by the fall in commodity prices.

Nigeria is Africa’s biggest economy and most populous nation.

The bank is expected to maintain some level of control over the currency “for funding critical transactions”.

He did not give details about the changes, which are expected to be announced in the next few days.

The Nigerian senate voted on Wednesday to invite Mr Emefiele and Finance Minister Kemi Adeosun for a briefing on “policies adopted to salvage the current economic situation”, although no date was set for their appearance.

The authorities have kept the official rate at around 200 naira to the US dollar, but the black market rate is closer to 450 naira.

In an effort to sustain the policy, the government imposed currency restrictions, and halted the importation of certain goods in order to stop dollars leaving the country.

Some analysts have blamed the policy for causing a shortage in foreign exchange, which in turn prevented fuel importers from buying supplies.

The fuel crisis has eased since the government introduced a range of measures earlier this month, including removing a subsidy and allowing importers to buy US dollars on the black market.