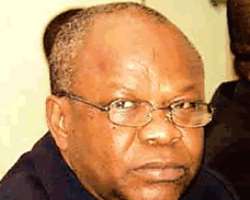 Iwu
As the outgoing National Chairman of the Independent National Electoral Commission (INEC), Prof. Maurice Iwu, hands over this week to Mr. Solomon Soyebi, National Commissioner in-charge of Operations, a crisis of succession may have ensued at the Commission. This is coming on the heels of the directive last week by the Acting President, Goodluck Jonathan, that Iwu should proceed on pre-disengagement leave with immediate effect from April 28, 2010.

Iwu's tenure officially ends on June 13, having been appointed INEC Chairman in 2005 by President Olusegun Obasanjo. He was before then a National Commissioner.

In the pre-disengagement statement issued by Jonathan's spokesman, Ima Niboro, Iwu was asked to 'proceed on pre-disengagement leave with immediate effect,' and also 'to hand over to the most senior National Commissioner, who shall oversee the activities of the Commission pending the appointment of a substantive chairman.'

Barely 24 hours after Iwu was asked to proceed on terminal leave, Umeadi allegedly appointed himself Acting Chairman and embarked on 're-organisation' of INEC. On Thursday, he was said to have gone to the office with a retinue of mobile policemen, and reportedly recalled some staff posted out of the Abuja by the outgoing chairman. On Thursday, he upped the ante by reportedly issuing instructions to the finance director not to honour any voucher.

But these moves are said to be causing ripples at Aso Rock. A source in the Office of the Secretary to the Government of the Federation said on Saturday that the Presidency is not happy with the 'seeming power grab by Umeadi because the last thing the Acting President would want now is a crisis of succession at INEC. We don't know on whose authority he is acting because as I speak, nobody has written him any letter authorizing him to act as INEC Chairman pending the appointment of a substantive chairman.'

Reminded that the statement asking Iwu to proceed on terminal leave requested him to hand over to the most senior National Commissioner with immediate effect, our source retorted; 'The word immediate effect is a military language which has no place in a democracy. In any case, what are the criteria for determining the most senior? All of them are National Commissioners and they are equal. Moreover, Iwu was not sacked. Yes, he has proceeded on terminal leave and won't return as INEC Chairman, but he remains so until June 13 and should therefore decide who to hand over to unless the government in its wisdom nominates an Acting Chairman. But it is absurd for someone to nominate himself. I think the Government has realized its mistake.'

When Sunday Sun contacted the Acting President's office, his spokesman, Mr Ima Niboro, said the statement that asked Prof Iwu to proceed on leave did not specifically mention Mr Umeadi's name. 'The issue of who Prof. Iwu hands over to is a matter of seniority as stipulated by civil service rules. It is a matter of seniority and there are factors like date of employment and number of years in service to be considered. Those are the things that will determine who Iwu will hand over to. The statement from the Acting President's office did not specify Mr Phillip Umeadi or any other name. It clearly stated that it is the most senior National Commissioner who will oversee INEC until a substantive chairman is appointed,' Niboro said.

Meanwhile, all arrangements have been concluded for Iwu to hand over the affairs of the Commission to Ogun State-born Soyebi this week. A source within the Commission said that Iwu settled for Soyebi based on his cognate experience. 'I can authoritatively tell you that the INEC Chairman, Maurice Iwu, who is presently on terminal leave prior to the expiration of his tenure will hand over to Commissioner Soyebi this week. While it is true that there is no senior or junior when it comes to National Commissioners, between Umeadi and Soyebi, the latter has served longer in INEC. In fact, Soyebi is the longest serving INEC Commissioner now. Besides, he was a Resident Electoral Commissioner (REC) before he was appointed a National Commissioner. So, in terms of cognate experience, he is way ahead of Umeadi and it will be unfair for Iwu to sidestep him and hand over to Umeadi, who is only using his connections in the media by virtue of his position as Media Commissioner to cause confusion. But all that will stop this week.'