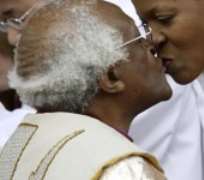 The reverend daughter of former Cape Town Archbishop Desmond Tutu has announced she will give up her Anglican church licence after marrying a woman.

The Rev Canon Mpho Tutu-Van Firth said that she had chosen to make a “dignified” exit rather than be stripped of her right to practice, since the church does not recognise gay marriage.

“Because the South African Anglican Church does not recognise our marriage, I can no longer exercise my priestly ministry in South Africa,” she said.

“The bishop of the (Cape Town) diocese was instructed to revoke my licence. I decided that I would give it to him rather than have him take it.”

The loss of a respected and well-known church figure could however strengthen the hand of modernisers in Africa’s most liberal country, who could push at a provincial meeting in September for a more nuanced approach to gay clergy in South Africa.

While same-sex marriage was legalised in South Africa in 2006, the South African Anglican law on marriage states: “Holy matrimony is the lifelong and exclusive union between one man and one woman.”

Bishop Raphael Hess, Tutu’s senior in whose diocese her Cape Town base falls, said he was “vexed” by the need for her to renounce her clerical duties but that he hoped it would be short-lived.

“The time has come for us to exercise pastoral care, for us to demonstrate a shift that is reflected in the law,” he said.

“We would be able to have Rev Canon Tutu be able to minister. At the moment she cannot and she has accepted that but we are hoping that there might be a window for us to change it.”

Tutu is one of five children of Desmond Tutu, the former Archbishop of Cape Town who won the Nobel Peace Prize for standing up to the apartheid government and seeking to reconcile South Africans. He has also spoken out in favour of gay marriage, saying he would refuse to go to a “homophobic heaven”. Tutu’s daughter and her gay partner
Tutu is executive director of her parents’ eponymous charitable foundation and divorced with two children. She married her long-time partner Marceline Van Furth, an atheist academic who is also divorced with children, in her native Netherlands in December.

The pair held a second ceremony that was attended by the Tutus and officiated by Rev Charlotte Bannister-Parker, a priest from Oxford, on Sir Richard Branson’s wine farm in Franschhoek earlier this month.

Desmond Tutu was given permission by the Archbishop of Cape Town, the head of the Anglican church in Southern Africa, to give the union a “father’s blessing”.